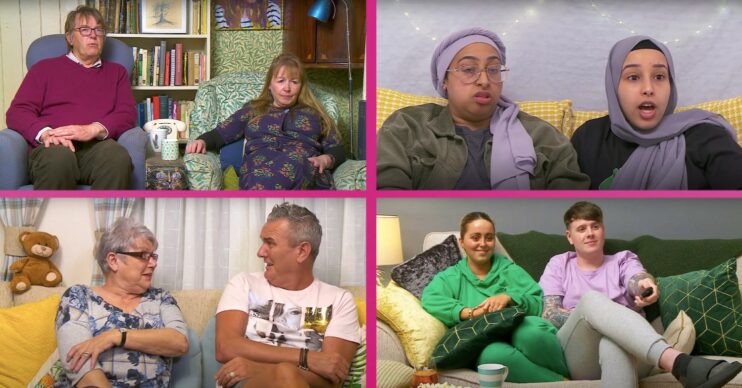 Gogglebox cast: Ages and jobs of all the current critics

Get to know the stars of the Channel 4 show better

The Gogglebox cast feel like our own family but what do we actually know about them – like what are their ages and jobs?

Well, read on and you’ll find out those details about the Gogglebox cast’s ages and their jobs ‘in real life’.

The hilarious pair Jenny and Lee are known for filming inside a caravan in Hull.

It’s not known what the two best friends do for a living.

However, they met when Jenny was the landlady of Crown Inn Pub in Paull, Hull and Lee was a regular customer.

Dave and Shirley have been married for over 40 years.

The pair enjoy filming Gogglebox together from the comfort of their home in Wales.

Sisters Ellie and Izzi joined the show way back in 2015.

Ellie is 31 years old and a hairdresser in Leeds.

Her youngest sister Izzi is 29 and a mother-of-two to five-year-old son Bobby and newborn baby Bessie Rose.

Gogglebox has welcomed two new faces to the cast, Joe and Roisin.

Joe is 25 years old and lives with his 23-year-old girlfriend Roisin.

The pair have been together for four years and started living together in their Glasgow home at the start of lockdown.

Read more: Gogglebox: Cast fall-outs, how much they’re paid and what really happens behind the scenes

Roisin works full time at BBC Scotland, where she works as a Social Media Producer.

She also hosts a weekly podcast called The Love/Hate Club.

Not much is known about Joe but we’re excited to learn more about him throughout the season.

Anna and Ken are also fairly new to the Gogglebox cast.

The pair have been happily married for over 50 years

Not much is known about their age and employment but we can probably assume that they are retired.

Giles and Mary quickly became quite popular for their dry sense of humour and quirky style and furniture.

When she’s not commenting on the latest telly, Mary is an author.

She’s also best known for having a column for The Spectator.

Giles works as an artist, and has his own website showcasing his work.

Their age has not been revealed on the show, but the pair met when they were 21 and have been married for more than 30 years.

Brother and sister duo Pete and Sophie have made quite the impression on viewers.

The pair always have us in fits of laughter with their take on the week’s TV.

Pete is currently 28 years old and his younger sister Sophie is 26.

Sophie works as a window dresser in Blackpool, while Pete reportedly has a job in insurance.

Bassit, Umar and their dad Sid are regulars on the show from Derby.

So what are the much-loved family’s real jobs?

Retired Sid qualified as a Power Engineer from the University of Derby and worked for the NHS for 37 years.

Umar has also worked for the NHS as a Biomedical Scientist in Microbiology at the Royal Derby Hospital for close to 17 years.

Bassit has been a teacher in a secondary school since 2007.

The family from Bristol are sports mad, with Tristan even playing semi-professionally for Bristol FC between 2007-2010.

Tristan is 31 now and a winger for Hereford FC.

His brother Twaine is 35 and also plays footie for Bradford Town, while Tremaine works as a chef.

Tremaine hasn’t shared his age, but he is the eldest of the three siblings.

South Londoners Marcus and Mica have become seriously popular on the show for their hilarious comments.

Marcus is Head Coach at a boxing gym in London where he trains up-and-coming fighters.

Meanwhile, Mica is a hair stylist.

Not much else has been revealed about them.

Best friends Abbie and Georgia have been on the show since 2018.

Georgia, 22, is a hairdresser in Durham.

Abbie is 20 years old – it is unknown what job Abbie has.

The Malones are one of the longest-serving families and have served up some iconic remarks throughout their time on the show.

Tom Sr is a lorry driver and mum Julie is a receptionist.

Their son Tom Jr is a freelance model and street dance choreographer.

He’s even performed alongside the Black Eyed Peas and Rita Ora.

Youngest Shaun was also once a stage actor, appearing in Billy Elliot.

However, now he coaches a local football team for under-16s.

Alison and George joined the show in series 10, alongside their daughter Helena.

Not much has been revealed about their private lives.

However, Helena has recently welcomed a new addition to the family after she gave birth to baby boy Edwin.

Amira originally joined the show in series 10 with her sister Amani.

However, Amira now appears as a duo with her friend Iqra.

Their exact ages and jobs are unknown.

But in 2019, Amira announced that she graduated from University.

Are you surprised by the Gogglebox cast’s ages and jobs? Head to our Facebook page @EntertainmentDailyFix and let us know.