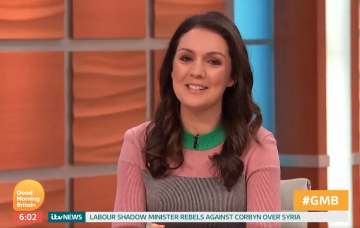 Weather presenter Laura Tobin was forced to change up her look on Good Morning Britain earlier today after her original outfit proved to be not so easy on the eye.

The 36-year-old, returning to the show after maternity leave, had to swap a stripy top she was seen wearing at the start of the show for a navy dress because the design caused a strobing effect for some viewers.

She later tweeted an apology to her 80,000+ followers for the distracting piece of clothing and joked viewers did not need to adjust their TV settings.

Laura also admitted she was a bundle of nerves on her first day back at work – but told her fellow GMB presenters she wanted to say farewell as the show prepares to move home from the London Studios.

And breath! All done! My first weather forecast back @GMB after being on maternity leave! Oh, I felt so nervous #FirstDayBack It’s so lovely to be back, I missed you all! pic.twitter.com/AbcHmmPJfo

Explaining the timing of her return, Laura said daughter Charlotte’s premature birth last year had changed all of her plans.

“So I just wanted to say goodbye to the building and hello to everyone.”

Laura also provided an update on Charlotte, who made her TV debut with a visit to GMB in February.

“She’s so good, she’s put on so much weight she’s so big and fat now,” Laura gushed.

Forecaster Laura also noted how different life can be as a working mum.

“I’ve just sat [backstage] in make-up expressing [milk] and will do it in the taxi on the way home too,” she said.

She continued: “It’s the first time I’ve had make-up on in such a long time.

“I’ve probably put makeup on five times at home and I don’t brush my hair or even shower.”

Quick outfit change for my first day back @GMB Sorry about the #strobe Such a shame, I love this dress! #NoNeedToAdjustYourSet pic.twitter.com/m4GOkhljTy

Fans were delighted to see Laura back on GMB – and the star thanked many supporters on Twitter for their well wishes.

@Lauratobin1 hi laura, hope you enjoyed your first day back. it was good to see you back on tv xxxxxxxxxx😀😊😍😋

it was fantastic to see you and the pics of baby charlotte Welcome back.

Thank you. Its been 3 months longer than planned due to Charlotte’s early arrival! I hope she misses me & doesn’t have to much mischief with Daddy!! https://t.co/WwCpLtSWeC

Thanks, it’s lovely to be back. ☺ https://t.co/lOn0qnqTlS

Thank you. I have so much love for baby Charlotte but there is still room for weather. She is my little ray of sunshine ☀ https://t.co/sdCL5hvbfb