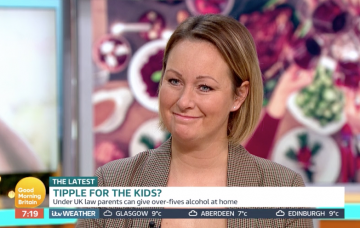 Good Morning Britain viewers have hit out at a mum for giving her eight-year-old son wine on Christmas Day.

Kerry Davies admitted she let her two children try alcohol on “special occasions” in a bid to put them off binge-drinking on street corners when they become teenagers.

But viewers slammed the ex-police officer’s decision as “totally inappropriate” and insisted booze was a harmful “drug” and a “poison”.

Kerry clashed with fellow mum Lottie Dailey who insisted she would not let her three kids drink before they’re 18 because alcohol was a depressant.

Children as young as five are legally allowed to drink at home under parental supervision.

But the NHS recommends that under-18s do not consume any booze and the Chief Medical Officer says an alcohol-free childhood is the “healthiest and best option”.

Kerry, who also lets her other child, 12, drink at home, told hosts Charlotte Hawkins and Ranvir Singh: “They are safest in the home to give it a go.

“They’ve tried it previously. I just don’t have any curiosity with my children. We have quite an open relationship.

“If they want to try something, they can try it but I’d rather they tried it under my supervision.

“They will try and sample anything that they ask to. I don’t force it on them.

“They never like it when they try it, which is even funnier. They pull the most awful faces.

“My eight-year-old had about three mouthfuls on Christmas Day and was like ‘that’s not good, Mum’.

“I was brought up on Babycham at Christmas and I wasn’t out on street corners drinking with my mates.

“It tried it with my parents. It’s boring then. You get to 15 and go ‘I’ve already tried that, I’m not interested’.”

But Lottie said letting children drink at home did not help them learn their limits and alcohol had serious emotional impacts.

“I don’t think, when we have an exponential mental health crisis in the UK among children that is rapidly rising, that we should be giving them a depressant,” she said.

“I for one have never been able to mentally handle my alcohol. I am a naturally sensitive person and I get depressed afterwards. I’m not alone. There are many of my friends who suffer with this.”

One tweeted: “Totally inappropriate.There’s a legal age limit for a reason. This woman’s 8 year old tries it? Why do people think it’s acceptable? It’s a drug.”

Another posted: “You wouldn’t give your child cigarettes to try, so why give alcohol? Both are bad for you, one’s a drug the other is poison.”

Totally inappropriate.There’s a legal age limit for a reason.This woman’s 8 year old tries it? Why do people think it’s acceptable? It’s a drug.

You wouldn’t give your child cigarettes to try, so why give alcohol, both are bad for you, ones a drug they other is poison.

I would say it depends on the age of the child and for sure only a small quantity … from 14 upwards I would say half a glass of shandy or buck fizz wouldn’t do any harm . But I am sure everyone has its own house rules

But others backed the idea of letting kids drink under parental guidance, with one writing: “Totally agree to let your youngsters try a drink at home, I do it with my 16 year old, at least I know what they are doing in my home.”

Another said: “Completely agree with Kerry. Educate kids now to avoid the binge drinking at 15 in parks. The Dutch allow their kids to drink early and they are really chilled out. Education like this will shape their lives in the future.”

#gmb @GMB Totally agree to let your youngsters try a drink at home ,I do it with my 16year old ,atleast I know what they are doing in my home

Completely agree with Kerry @GMB #gmb educate kids now to avoid the binge drinking at 15 in parks. The Dutch allow their kids to drink early and they are really chilled out. Education like this will shape their lives in the future

My 14 year old had some bucks fizz, my 9 year old wanted to try it so had some in an egg cup….he Didn’t like it so orange and lemonade for him!
I can’t see it doing any harm at all…its in my and my husband’s control.

Is it right or wrong to let young children drink at home? Leave us a comment on our Facebook page @EntertainmentDailyFix and let us know what you think!