He was amused by the resemblance

Kate Garraway made a bold style statement as she presented Good Morning Britain today and it didn’t go unnoticed by her co-host.

Ben Shephard couldn’t resist teasing the mum-of-two for wearing a bright purple wrap dress which he said reminded him of a certain treat.

Revealing his mockery to the audience, Kate said: “He’s been taking the mickey out of me, he always does it.

“Just before we come on air for a serious news story I’m giggling like an idiot.”

Ben chimed in with the reason why: “Because you look like a chocolate bar! The purple Quality Street!”

Luckily Kate took the remark in good humour, tweeting to say “he’s a cheeky one that Ben Shephard” after GMB reassured her on their Twitter feed that they thought she looked good.

Lots of her fans agreed and rushed to her defence on Twitter to say they thought she looked great and would love to wear her dress themselves.

One gushed: “Your purple dress is stunning Kate. Love the colour and style” while another said “love love your dress, where is it from.”

However, others admitted they thought Ben had a point, with one even mocking up a picture showing Kate next to the Quality Street chocolate in question to reveal the similarity. 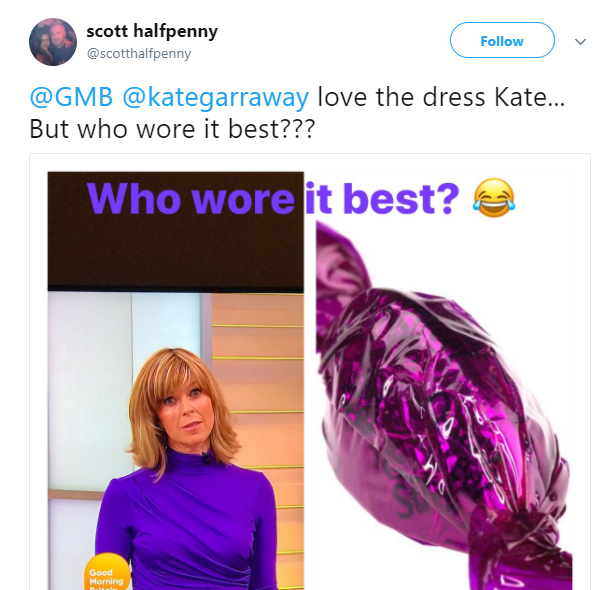 Kate said she didn’t mind though, telling Ben: “You also said I look like Professor Plum from Cluedo but to be honest you’ve called me worse so I can live with that.”

When they weren’t discussing Kate’s outfit on today’s show, the hosts interviewed a Donald Trump impersonator who they gave a bizarre medical assessment from Dr Hilary.

They were also put through their paces by The Body Coach Joe Wicks and interviewed comedian Chevy Chase who is back with a new film on Netflix.