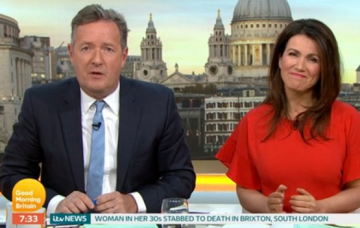 Piers Morgan divided Good Morning Britain viewers with his return to the show this morning.

Some were delighted he was back following a three-week break, but others preferred the show with his replacements, Richard Madeley and Eamonn Holmes.

“Love having @piersmorgan back on in the morning #GMB #KeepItReal,” tweeted one. Another agreed writing: “I love Piers Morgan! #GMB”

“Glad to see @piersmorgan back on #GMB it’s been a comedy show without you and not in a good way,” said a third. 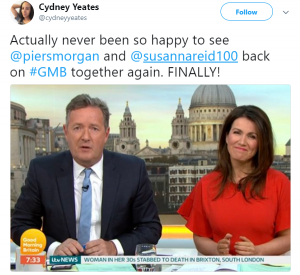 Others were not so overjoyed to see Piers on telly over breakfast and shared their displeasure on Twitter.

“Really enjoyed GMB over the last two weeks but unfortunately Morgan is back now. When is he off again?” wrote one.

“Can’t bear Piers Morgan! He always has to interrupt and get his point across as well as speaking over people #GMB” said another.

“I don’t mind Piers but I way preferred the manner & tone of Eamonn. #GMB,” said a third of Mr Holmes, who took over Piers’s role last week.

Piers, 53, wasn’t the only one going back to work today. Susanna Reid also returned from her Easter break, while weather forecaster Laura Tobin is back following her maternity leave.

The presenters were all reunited in the new ITV studios following their relocation from the South Bank while the old facilities are updated.

Piers joked about how much he is enjoying the new studio which has all the latest technology.

He shared a photograph of himself and co-stars Susanna Reid and Charlotte Hawkins in front of a large screen with the words “Wenger Out”, a reference to the Arsenal manager he has strong opinions about.

He wrote: “Love our new @GMB set. I click my fingers & can get anything I like to appear on the big screen.”

Love our new @GMB set. I click my fingers & can get anything I like to appear on the big screen. pic.twitter.com/IjWvj5FkyE

Earlier in the broadcast Piers shared another photograph of himself on the set with Susanna, Laura and newsreader Charlotte Hawkins with the caption: “Piers’s Angels.”

Laura also shared a snap from the new studio, saying how much she liked her new facilities.

“‪I LOVE my weather area on the new @GMB set.‬ A giant new plasma to give you the weather in even more detail, monitors to show more information & a desk so I can keep a close eye on the weather & bring you all the latest all morning,” she wrote.

‪I LOVE ❤️ my weather area on the new @GMB set.‬ ‪A giant new plasma to give you the weather in even more detail, monitors to show more information & a desk so I can keep a close eye on the weather & bring you all the latest all morning. ‬

Charlotte also trumpeted the new set, with a photo of the foursome, writing: “Welcome to our new home!”

ITV Studios has moved its daytime productions to Television Centre in White City for the next few years during the redevelopment of the South Bank site.

Other shows to relocate include This Morning, Lorraine and Loose Women.

On Sunday, Piers and Susanna visited the new studio for a rehearsal.

Susanna posted a selfie of the pair, writing: “READY? We are BACK! … and in a whole new studio. See you all tomorrow ITV at 6am.”

Piers also posted a photo of himself and his co-host seated at desks in front of the London skyline.

“@piersmorgan is back on @GMB tomorrow!!!! Yesssssss!!! Hate it when he’s on holiday,” one fan wrote of the news.

But others said thanks for the warning as they would switch back to the BBC!

Testing out our fancy new studio. See you all tomorrow morning at 6am. @susannareid100 @gmb