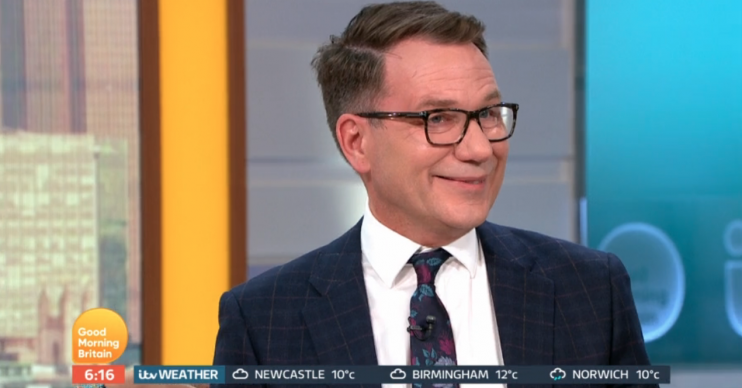 Did he really say that?! Yes, he did

Richard Arnold had viewers choking on their breakfast cuppas earlier today after he came out with a very lewd gag on Good Morning Britain.

The ITV show’s other presenters were also left in stitches by the 49-year-old showbiz correspondent’s comment which followed a red carpet chat with Aladdin star Will Smith.

Viewers saw host Kate Garraway rubbing a bedside lamp in the hope it may grant her a wish and conjure up a half naked Will Smith when cameras cut back to the studio – but that prop was dwarfed by a monstrous genie-style lamp which was claimed to be “the biggest ever”.

Noting the GMB set pretty much had to be broken up in order to wheel the huge lamp into the studio, Ben Shephard encouraged a member of the production crew, Alex, to stand next to it to give viewers an idea of the scale of the prop.

“Alex is one of the biggest of our crew,” Ben advised.

But as Alex gave the fake lamp a quick rub, Richard dove in with a cheeky comment that took many of those watching by surprise.

“Rub it hard enough and you’ll get a big puff,” he deadpanned as those sitting with him fell about.

“Never had a panto audition in my life,” Richard continued, as Ben and Kate both suggested he should be signed up for one.

Chuckling away, Kate gasped: “It’ll take me a while to recover from that one!”

Many fans were also in hysterics at the quip – and were quick to let Richard know he had helped them start their day with a smile.

“That had me choking on my morning cuppa, you cheeky man!! 😂” laughed one viewer on Twitter.

“@RichardAArnold simply the best start to the day!! Coffee in hand and giggling at the TV 😊 thanku,” added another.

And another commented: “Only @RichardAArnold could get away with that 😂.”

“I love @RichardAArnold, he is hilarious and makes my day 🥰,” contributed yet another tickled observer.

“👏🏾👏🏾 Good Morning Britain. Great to start the day with a laugh,” applauded another.

However, one viewer clearly did not agree.

They tweeted: “He’s the reason I don’t let my children watch GMB anymore. As a family we used to have GMB on as we all got ready to start our day but his constant gay sex innuendos were to much for my ears let alone children’s.”

And somebody else only had eyes for production hunk Alex.

“Well hello Alex😍… can you be my genie..what a hottie,” they said.

Only @RichardAArnold could come up with a double entrende this early in the morning 😳😂 pic.twitter.com/zcizW5GgP2