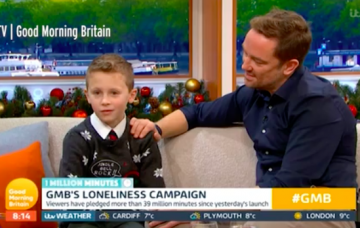 The pair were left devastated after Gemma died in November 2017...

Ethan Thomas moved Good Morning Britain viewers to tears today, when he spoke about the impact of tragically losing his mum to cancer.

The nine-year-old son of former Sky Sports presenter Simon Thomas, Ethan appeared on GMB as part of the TV show’s Loneliness Campaign – which is aiming to combat loneliness this Christmas.

And viewers were in bits as the schoolboy opened up about his mum Gemma’s death for the first time since she died of acute myeloid leukaemia, just days after being diagnosed in November 2017.

Speaking bravely about the loss, he broke the hearts of watchers when he said that while he was “still sad”, he still had his dad.

Don’t set us off again!

When hosts Ben Shepherd and Kate Garraway asked how he was coping after his mum’s death, Ethan replied looking at his dad: “I’m still sad, but I still have you.”

Simon said: “It has been hard, it has been horrendous… in the early period it felt like time stood still.

“You feel so much pain on their behalf, because one thing you mourn, that we both mourn, is the lost years for mummy.”

He added: “The years that we expected her to have ahead as my wife and more importantly, his mum. I can just about deal with my own grief and pain but then I see him playing on his own.”

Ethan also commented on the reassuring notes and letters his dad has been writing for him since his mum passed away, saying: “I thought that even if I’m at school I still feel like daddy is still with me.”

Talking about school, which he went back to one week after Gemma’s death, Ethan added: “My teaching assistant helped me because she let me make these cards so that when I feel sad or lonely I can write these cards and have some time out.”

@SimonThomasSky amazing interview on #GMB this morning, I’m in tears before I leave the house! I bet you are rightly very proud of your young man x

@SimonThomasSky just watched you on @GMB with your son, had me in tears, amazingly inspiring, such strength from you both ❤️

@GMB well that’s ruined my make up 😢. Such an amazing father and son bond @SimonThomasSky ❤️

@GMB @SimonThomasSky am in tears watching. You and your son are truly inspirational!! I lost my mum at 19 and thought that was hard, bless you and your little boy xx

Fans were heartbroken, with one tweeting: “@SimonThomasSky amazing interview on #GMB this morning, I’m in tears before I leave the house! I bet you are rightly very proud of your young man x.”

Another said: “This is absolutely beautiful, just watched you and your lovely little boy on gmb brought tears to my eyes and I have so much respect for you both, All the best to you and your son.”

A third added: “@SimonThomasSky just watched you on @GMB with your son, had me in tears, amazingly inspiring, such strength from you both.”

Many more paid tribute to the young lad and his dad on what must have been a difficult morning.

During the interview, Simon credited Ethan for helping him deal with his grief.

He said: “He drives me out of bed in the morning. I have to do the school run. Being a single parent is the hardest thing but Ethan is a massive blessing, but it’s hard work.”

One year on from Gemma’s passing, Simon has a new girlfriend who he describes as an “incredible support”.

Were you moved to tears watching the interview? Leave us a comment on our Facebook page @EntertainmentDailyFix and let us know what you think!