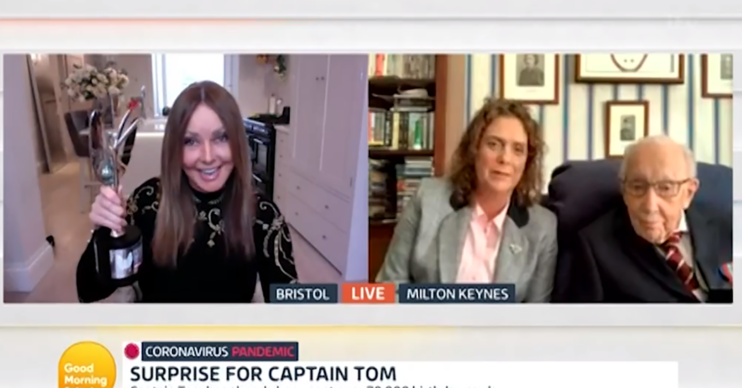 The war veteran has raised millions for the NHS

Captain Tom Moore has received a Pride of Britain award after raising millions for the NHS.

The war veteran, 99, has raised over £28 million for the NHS during the coronavirus pandemic by doing laps of his garden ahead of his 100th birthday.

He originally set out to raise £1000 by walking 100 times around his garden in Bedfordshire.

However, Captain Tom has now passed the £28 million mark and has no plans to stop raising money.

He appeared on Thursday’s Good Morning Britain (April 23) to speak to Piers Morgan and Susanna Reid.

A surprise for Captain Tom

Pride of Britain host Carol Vorderman appeared on the show via video link to surprise Captain Tom with an award.

She explained the Pride of Britain team had thousands of nominations to give him an award this year.

So far, the war veteran has raised over £28 million for NHS Charities Together.

Carol said: “Tom, your kindness, your modesty, your utter determination and your selflessness.

“You’re raising money, quite frankly a ridiculous amount of money and you keep saying this is not for you.

“It’s for those that you regard as heroes working in the NHS. Well, I’ve got something that is for you.”

Thank you all very much for taking the time to vote.

She picked up the Pride of Britain award as Captain Tom looked on.

She continued: “This will be your Pride Of Britain award sent with all of our love and everybody that’s nominated.

“I can’t give it to you now but I want to give this to you later in the year when we have our awards ceremony.”

A string of famous faces then thanked Captain Tom for his incredible efforts including Sir David Jason, Colin Thackery and the Duke and Duchess of Cambridge.

Captain Tom said: “I’m totally in awe of this award. Thank you all very much for taking the time to vote.

“It’s such a prestigious one.”

Viewers were in tears watching Captain Tom receive the award.

One person wrote on Twitter: “In tears this morning watching GMB! Captain Tom has won a Pride of Britain award thoroughly deserved!

“What an amazing man.”

Another said: “Omg, I am in absolute floods of tears watching Captain Tom getting his Pride of Britain award on #GMB. We salute you.”

A third added: “In floods of happy tears watching @carolvorders present @captaintommoore with a Daily mirror Pride of Britain Award on #GMB.

“Huge congratulations to a dear man, a great British treasure!”