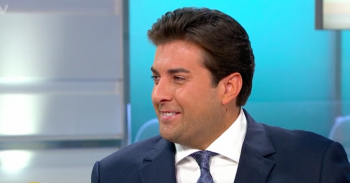 He's was on the morning show as a guest showbiz reporter

The TOWIE star and on-and-off again boyfriend of Gemma Collins was filling in for Richard Arnold as a guest showbiz reporter.

The 31-year-old, known by nick nickname “Arg” was presenting alongside Kate Garraway and Richard Madeley.

During his segment, Arg admitted he’d never watched BBC drama Line of Duty, but then rather bizarrely went on to drop a huge clanger about last night’s episode – leaving fans fuming.

“Oh no, I’m going to be wondering who it is now,” Kate said.

“I think it’s Stephen Graham isn’t it, the actor,” Arg added. “He’s one of my favourite actors. I watched him in Snatch. I absolutely love him.

“It’s a bit like Game Of Thrones. They chop the big names out of nowhere.”

Graham played character John Corbett in the latest series, series 5, of the show.

Read more: GMB’s Richard Madeley gets told off by his own sister

One person said: “Arg tries his best not to spoil it but @richardm56 just basically gives it away who dies in #LineOfDuty. Subtle as a brick through a greenhouse window mate…”

Arg tries his best not to spoil it but @richardm56 just basically gives it away who dies in #LineOfDuty. Subtle as a brick through a greenhouse window mate… 🤦‍♂️#gmb

Another said: “Arg just said who was killed in last nights #lineofduty,” while a third added: “Arg has spoilt it for everyone, useless fat fuck. #LineOfDuty #GMB.”

One complained that GMB were “scraping the barrel” by choosing him and another labelled his presenting efforts as “wooden.”

However, Arg wasn’t the only one to make an unfortunate blunder on Monday’s episode.

Arg defiantly refused the drink after Kate poured him a cup – who was clearly oblivious to the fact that he is a recovering alcoholic.

“Do you know what? I’m going to say no because I’m eight months clean and sober!” Arg told Kate.