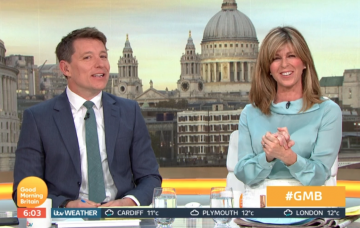 Could they take over full time?

Good Morning Britain fans have called for stand in hosts Ben Shephard and Kate Garraway to be handed the roles on a regular basis.

The pairing have been just one presenting duo to fill in for Piers Morgan and Susanna Reid over the last couple weeks, with Richard Madly, Ranvir Singh and Adil Ray also appearing as anchors for the ITV breakfast show.

But it seems Kate and Ben may have proved the most popular substitute hosts with viewers – particularly after a fit of giggles earlier today which had Lorraine Kelly wondering whether the GMB panel had been ‘drinking’.

A bizarre moment in which Kate ended a segment with a momentary honking noise was later replayed by mischievous producers, leaving her, Ben and on-air colleague Charlotte Hawkins crying with laughter.

“Why did we even show that again?” Ben pondered as they fell about in hysterics.

“The producer chose to show a really embarrassing moment of me on television – again,” Kate said, pretending to be seething about being stitched up.

Joining the team to preview her own show, Lorraine asked: ”Have you all been drinking?”

And as Charlotte dabbed the tears from her eyes, Kate got a shot back in at their boss behind the scenes by quipping: “I think someone has on the team!”

Their light touch and infectious silliness was lapped up by those watching at home, with some viewers suggesting on social media that Kate and Ben should take over from Susanna and Piers full time.

“Lol Ben and Kate. What a great morning’s show, should be you two a lot more. Great job guys,” tweeted one person.

“I love Kate, she brings so much light and happiness to the show,” added another.

“Love these guys!” said a third.

They continued: “You two should be on GMB full time! Far more entertaining and true… No airs and graces @kategarraway and Ben @benshephard is a dream! Thank you guys for making my mornings far better.”

Others agreed, with one fan tweeting: “Love Ben and Kate, they should do it all the time.”

Another commenter remarked: “I feel the show is so much more relaxed without a certain person. A much better atmosphere.”

“Such a better watch than the other two,” another concurred.

But not everyone was convinced that Piers and Susanna should be worried about receiving their P45s.

“Any news today or just these two cackling on? Dire when Piers off,” grumbled one fan.

“Hurry up back @piersmorgan, it is terrible without you,” tweeted another.

Would you like to see Ben and Kate take over the GMB reins from Susanna and Piers?