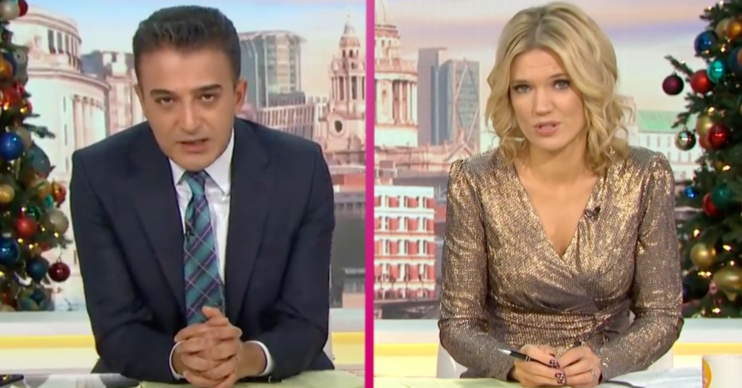 Viewers waded into the debate

Good Morning Britain came under fire today for conducting a poll asking if the UK should go into a lockdown ahead of Christmas.

It’s fair to say the British public were more or less unanimous with their answer to the yes or no poll.

And they didn’t hesitate to reveal just what they thought of the question being asked in the first place.

After GMB hosts Adil Ray and Charlotte Hawkins hosted a debate about it live on the show, viewers weighed in.

What did the GMB Christmas lockdown poll ask?

The poll was posted on Twitter at 7am today (December 20).

It asked: “Should we lockdown before Christmas?”

As ED! went to press, just 11% of voters said yes, we should lockdown ahead of Christmas.

The other 89% of voters answered a hard no – and quickly got busy in the comments section of the post.

Should we lockdown before Christmas?

How did viewers respond to the poll?

Not very favourably, it has to be said.

Many accused Good Morning Britain with being “obsessed” with the idea of a Christmas lockdown.

Others, meanwhile, called for the ITV breakfast show to be taken “off air”.

Read more: This Morning fans confused as Rylan Clark takes over from Phil and Holly

“We shouldn’t lockdown ever again, especially as the government doesn’t seem to have locked down at all, what with Christmas parties and summer wine and cheese parties,” said one.

“No never again. Got to learn to live with this,” said another.

However, while the debate raged about whether the UK should or shouldn’t endure another lockdown, others took aim at the show itself.

One viewer said: “You know who we should lock down indefinitely? The entire GMB cast!”

“It’s OK for those working in journalism and presenting in London, as they get to feed fear, continue on full pay – and plenty of it – with a self-righteous attitude,” added another.

GMB accused of being ‘obsessed’ with Christmas lockdown

“Why are you so obsessed with us getting locked down or restrictions?” asked another.

“#GMB literally obsessed with the idea of another lockdown,” a second agreed.

Some went one step further, though.

“Should #GMB be taken off air?? Absolutely yes – [bleep] reporting as always,” declared one.

One person even ran a Twitter poll that asked: “Should #GMB be cancelled?”

So what do you think? Join the debate on our Facebook page @EntertainmentDailyFix.