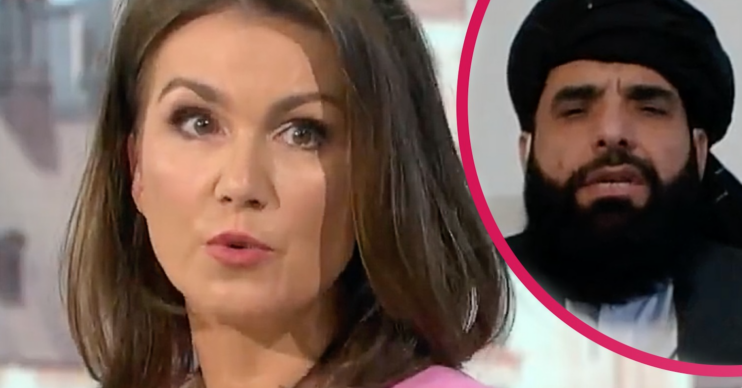 It was a tough subject for many

On GMB today (Wednesday September 1), viewers were in disbelief when a Taliban spokesperson was interviewed.

Susanna Reid and Ben Shephard were back in the hot seat on Good Morning Britain after their summer break.

However, after the crisis in Afghanistan, they welcomed a very controversial guest – a spokesman of the much-maligned Taliban.

In a wide-ranging interview, Susanna, 50, got to work asking Dr Suhail Shaheen some tough questions.

She asked Dr Shaheen how the group was going to stop Al Qaeda in the country.

He responded by saying that they have no place in Afghanistan.

Meanwhile, Susanna then asked him if women have a place in the Taliban’s new regime.

She quoted reports of a news anchor being turned away from her workplace.

“What you’re saying, Dr Shaheen, and what is happening on the ground… there seems to be a discrepancy there,” Susanna asked.

However, once again, Dr Shaheen reassured her and said that this was a personal incident only.

But as the two spoke, viewers took to Twitter to express their disbelief that the Taliban was even given a platform on the show.

Why have they even given the Taliban air time? Disgusting that this failing programme has resorted to these tactics. #GMB

Why have you given the Taliban air time? Disgraceful.

One wrote: “@GMB engaging with the Taliban…seriously? Not your smartest move.

“Not everything can be discussed, entertained, validated or understood.

“Why would you give them the airtime and platform to perform?!”

In addition, another said: “Why have they even given the Taliban air time?

“Disgusting that this failing programme has resorted to these tactics. #GMB.”

After that, a third said: “Why have you given the Taliban air time? Disgraceful.”

Meanwhile, despite the seriousness of the interview with Dr Shaheen, viewers welcomed back their two flagship hosts from their summer break.

And Susanna explained that she had been to “gorgeous Cornwall” for her break.

Furthermore, Ben also revealed he had visited Devon and the Isles of Scilly.