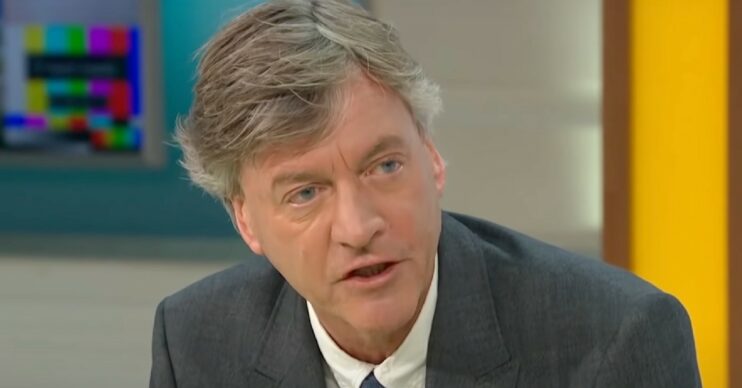 Richard is in hot water yet again with GMB viewers

GMB host Richard Madeley came under fire for saying ‘God helps people who help themselves’ during a debate on today’s show (Tuesday, May 17).

During today’s show, the cost of living crisis was once more a topic of discussion.

Earlier this week, Tory MP Rachel Maclean suggested that people struggling due to the cost of living crisis should consider working longer hours.

She also said that alternatively, people could just get better paid jobs.

Unsurprisingly, Maclean’s comments have been hugely divisive. Many have slammed the MP for being “out of touch” and “patronising”, whilst others have agreed with her.

Sophie agreed with what the minister had to say, whilst Femi totally disagreed.

It was at around the halfway mark through the interview when Richard made the comments that angered viewers.

Turning to Femi during the debate, Richard asked: “Do you think that she has got a point?

“That we are too quick as a society, largely because of social media to jump on the heads of people who are going into areas that are controversial but some people say need saying.”

He continued, saying: “In other words ‘God helps people who help themselves.’

“It’s an old saying but it has a degree of wisdom to it, hasn’t it?”

It’s safe to say that viewers were not happy with the 66-year-old’s comments.

Plenty of viewers took to Twitter to slam the GMB host, with many saying he needs to think before he speaks.

“Honestly, Richard Madeley needs to reconsider his words or perhaps think about his usefulness on GMB,” one viewer tweeted.

“Using the ‘God helps those who help themselves’ is particularly short-sighted in current circumstances. Or is he suggesting we pray for more money and a better quality of life?”

“Richard Madeley has literally just said on @GMB ‘God helps those who help themselves’ in relation to cost of living crisis,” another said.

“So all those people doing their best across Britain to keep heads above water can expect a cheque in the post off God to cover 54% increase in energy costs.”

“Richard is out of touch saying we should pray should pray to God for money,” a third said.

“What has God to do with the cost of living. Richard is insensitive on a huge salary. He is not experiencing poverty. The cost of living is going to be huge than the pandemic. GMB needs better presenters.”

Head on over to our Facebook page @EntertainmentDailyFix and let us know what you think of this story.