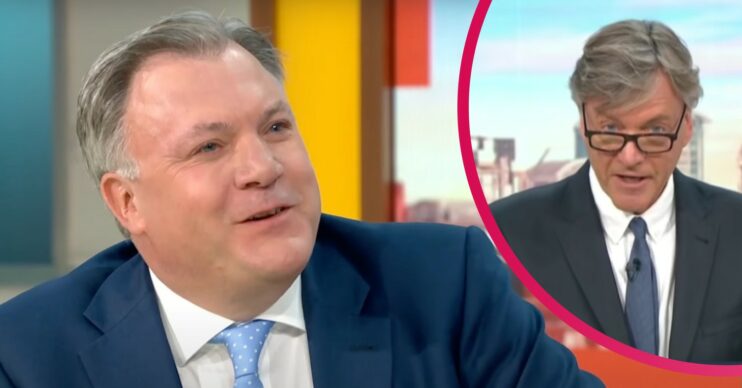 GMB viewers had a VERY mixed reaction today as Richard Madeley was replaced.

Richard was co-presenting the show yesterday (Monday, April 25), but he was nowhere to be seen today.

Instead, it was former Labour politician Ed Balls who was sat next to Susanna Reid on this morning’s show.

Ed has co-hosted the show on numerous occasions, however, his presence has always divided viewers.

Ed seemed very happy to be on the show today, telling Susanna “it’s good to be back” at the beginning of the programme.

“It’s good to be back,” Susanna replied before she went on to speak about her time reporting in Poland.

Ed may have been happy to be back on the show, but not all viewers were.

“Man alive, Ed Balls is terrible on #GMB he just doesn’t get any better,” one viewer tweeted.

“Ed Balls get off the TV please!” another said.

“Ed Balls presenting…” a third wrote, adding yawning emojis at the end of their tweet.

However, some viewers were happy to see the former politician on the show.

“Just loving Ed Balls on GMB would like to see him more on GMB,” one said.

“We love Ed Balls more of him please,” another wrote.

“I don’t usually watch [GMB] but now I know Ed Ball’s on this morning I’ll tune in,” a third said.

The 65-year-old was hosting the show alone yesterday. This was because his usual co-host, Susanna, was out in Poland.

The 50-year-old was reporting from the Ukrainian borders on the current refugee crisis caused by the war.

At one point during yesterday’s show, Susanna attempted to read news headlines. However, technical glitches meant that this was a lot harder to do than expected.

She was cut off whilst talking, leading to Richard then announcing “we’re having some slight communication issues there”.

“We kind of assumed that might happen at some point today. That’s technology in 2022 for you,” he remarked.