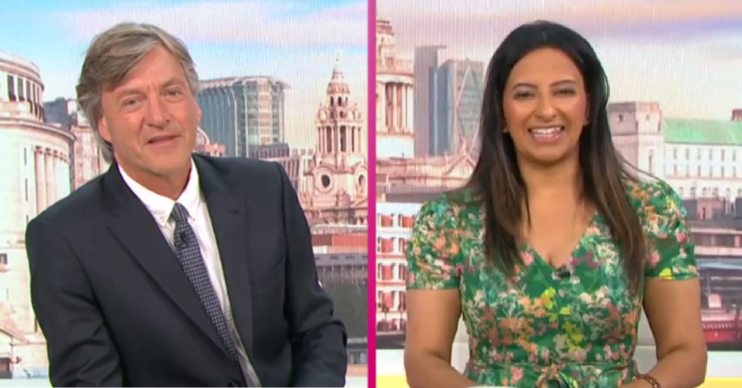 He can talk for (GM) Britain!

GMB viewers were left in hysterics today as the show’s hosts struggled to get a word in and were jokingly called ‘rotten pigs’ by a guest.

Actor Brian Blessed was the guest in question.

The breakfast show descended into chaos as Richard Madeley and Ranvir Singh tried to chat to him.

First the hosts were uncertain if they would even get their final guest of the show today.

Eventually, after Brian’s Zoom link failed, they did manage to get him on the phone.

Richard told viewers: “We have a crisis in the studio.”

Ranvir added: “Brian Blessed was meant to be on a Zoom… unfortunately the link isn’t working.”

She said: “The only guest you can have on the phone is Brian Blessed because his voice is so recognisable.”

And Brian chimed in: “It’s a lovely morning. My favourite show. Is Richard alright?”

Actor @brianblessed tells @ranvir01 and @richardm56 about the surprising request he’s had from the Queen. pic.twitter.com/putGiJek6b

Next Brian launched into how he’s compering a 50 year celebration of Tubular Bells.

Despite the hosts trying to interject and ask questions, Brian wasn’t having any of it.

Richard and Ranvir didn’t even manage to stop him talking to hand over to Lorraine Kelly.

As Ranvir told him they’d have to end the interview, poor Brian was disappointed.

Both Richard and Ranvir were in hysterics.

Fans were also in hysterics over the chaotic show.

One viewer laughed: “Can’t get a word in edgeways with Brian Blessed on #GMB.”

A second wrote: “Neither of them will manage to talk over Brian Blessed, ha ha!”

And a third said: “Brian Blessed on GMB a thing of beauty, wouldn’t let them ask any questions just talked non stop about random stuff, brilliant.”

At the request of the Queen, he will compere a series of live shows at the Royal Albert Hall in London.

Later this year, on November 22, Brian will join the Royal Philharmonic Orchestra.

The event marks half a century since the release of Mike Oldfield’s groundbreaking track.

Did you catch Brian Blessed on GMB this morning? Let us know what you thought on our Facebook page @entertainmentdailyfix.