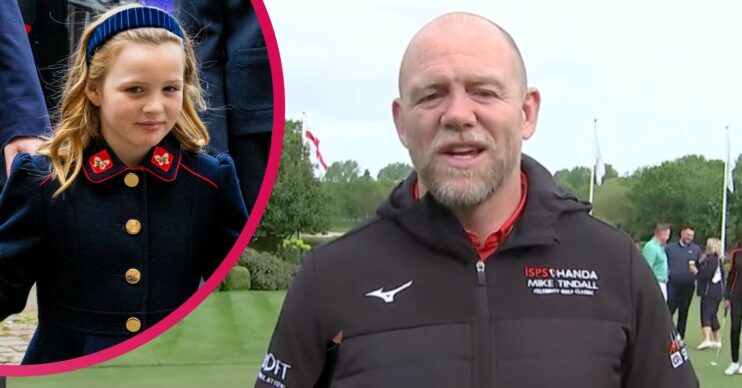 On GMB today, Mike Tindall was grilled over his daughters’ role in the upcoming Platinum Jubilee celebrations.

The 43-year-old, who has three children with Zara Tindall, rubbished claims that his daughters will have a “prominent” role in the Jubilee next month.

During today’s (Friday, May 13) edition of GMB, Kate Garraway and Ben Shephard spoke to Mike via video-link.

The aim of the event is to raise money for The Cure Parkinson’s Trust.

After discussing the charity golf day, the conversation soon addressed the elephant in the room – the Platinum Jubilee.

Kate and Ben were keen to know about what Mike’s daughters will be doing during the celebrations.

It was Ben who kicked off the discussion about the Jubilee.

“It’s a big year for Zara’s family the Platinum Jubilee,” he said. “Have you been given your instructions? Have you got any roles on the day?”

“I’m looking forward to it, I think the Queen is an unbelievable lady,” he continued.

“I think people think she’s invincible you have to remember she’s a 96-year-old at the end of the day.

“She’s incredible in what she’s done over her lifetime. I can’t wait to celebrate that.”

Ben then quizzed Mike about the role his daughters, Mia, eight, and Lena, three, will play at the Jubilee.

Ben said that Mike’s daughters will have a role during the celebrations. “How excited are the girls?”

“I’m not entirely sure how true that is,” Mike replied. “I don’t know what their role is generally. If you know can you tell me, please?”

Ben then informed him that the Queen’s great-grandchildren are reportedly set to arrive to the celebrations in a coach or carriage together.

“I think someone took a picture of something we were doing privately and they put two and two together and got seven,” Mike replied.

“I’m not entirely sure it’s true but we’ll wait and see.”