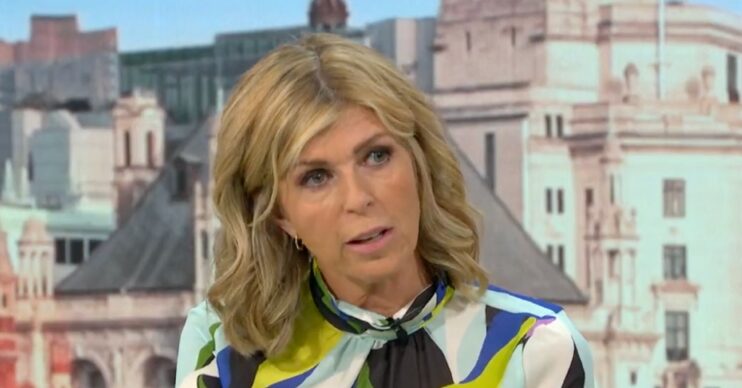 The 54-year-old was wearing a green and blue patterned top, and viewers were desperate to know where it was from!

However, it wasn’t Kate’s co-host who was distracting viewers’ attention for once – it was what she was wearing!

The 54-year-old presenter is known for wearing some colorful and interesting dresses while fronting Good Morning Britain, and today’s choice of outfit was no different.

Kate decided to go for a colourful patterned top today, which really stood out on the screen.

The top consisted of numerous shades of blue, green, white, and brown. There was even some pink/purple on there too.

Usually, viewers are quick to slam Kate’s outfits, but today it seemed as though more people liked it than loathed it!

Plenty of viewers took to Twitter to discuss Kate’s outfit this morning.

“Love the colours Kate,” one viewer said of her top.

“Gorgeous top Kate. Can you say where it’s from please?” a fifth wrote.

One tweeted: “@kategarraway loved your blouse this morning on GMB please can you tell me where it’s from?”

A new Prince Harry interview is set to air today, and this is what was being discussed on GMB today.

Before Kate made her dig at the Duke of Sussex, a clip was shown of him discussing his recent meeting with the Queen. He also said that he was making sure she was being “protected” and had the right people around her.

After the clip was shown, Kate said: “It’s strange, isn’t it? Yesterday we were saying: ‘Oh isn’t it a lovely thought that he might be there on the balcony with Meghan,’ and it would be a warm thing. Now maybe this has changed it all.”

She then said: “There’s seemingly never a quiet day, is there, in the life of Harry and Meghan and their relationship with the royal family.”

So what do you think? Head to our Facebook page @EntertainmentDailyFix and join the debate.