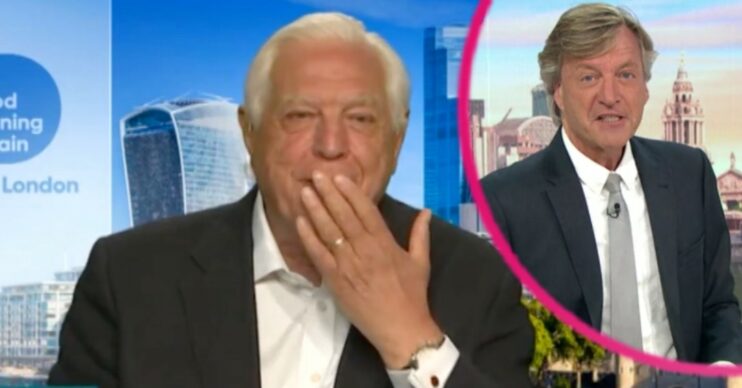 'Was he talking to Richard Madeley?'

The 76-year-old broadcaster appeared on the ITV programme to discuss his new novel, Our Friends in Beijing.

But during the chat, John accidentally let slip a rather explicit word.

Speaking about a mock execution in his book, John said: “It wasn’t me in China, of course, but it was me in Beirut.

“I was made to kneel down and the guy stuck a gun in the back of my neck and pulled the trigger and, you know, I thought my last moment had come and then everybody laughed.

“And I got up and brushed off my knees and I thought I’ve got to reassert myself here, so I said to the guy who’d fired the gun, ‘Do you know what, you’re a real [bleep].”

John immediately covered his mouth as he noticed he let the word slip.

Thankfully, Richard and Kate saw the funny side of the blunder.

Kate said: “You’re in trouble now for saying that on breakfast television.

“We won’t give you a mock execution, you’re ok, you’re ok, I think people will understand. But we apologise.”

Meanwhile, Richard added: “I think people will fully understand you’re talking about something a few years on.

“Obviously we apologise for anyone who’s offended.”

How did viewers react to John’s slip-up?

Taking to Twitter, one said: “@kategarraway face on @GMB when John Simpson said he called someone a [bleep] for subjecting him to a mock execution was priceless.”

A second added: “I laughed so much John. Not watched GMB for ages, but you saying [bleep] was the highlight of my day.”

'I can't believe this is how it ends.'

Legendary broadcaster John Simpson was victim to a mock execution in Beirut and he describes what he thought were his last moments. pic.twitter.com/G71eWehCJu

A fourth shared: “Nearly spat my coffee out when John Simpson called someone a [bleep] on GMB. It certainly woke me up.”

A fifth joked: “Drowsing whilst trying to get myself out of bed – then suddenly awake hearing the word [bleep] on @GMB. John Simpson, that was TV gold.

John Simpson, that was TV gold

Meanwhile, others claimed John directed the comment at Richard.

One said: “Was he talking to Richard Madeley?”

Another joked: “Presumably John Simpson describing someone as a [bleep] was referring the Richard Madeley?”

A third commented: “He knows one when he sees one eh Richard Madeley.”

A fourth viewer added: “Please, please could John Simpson replace Richard Madeley on #GMB after waking up the nation when he said [bleep].”

Another shared: “Heard that John Simpson called someone a ‘real [bleep]’ on GMB and immediately thought of Richard Madeley.”