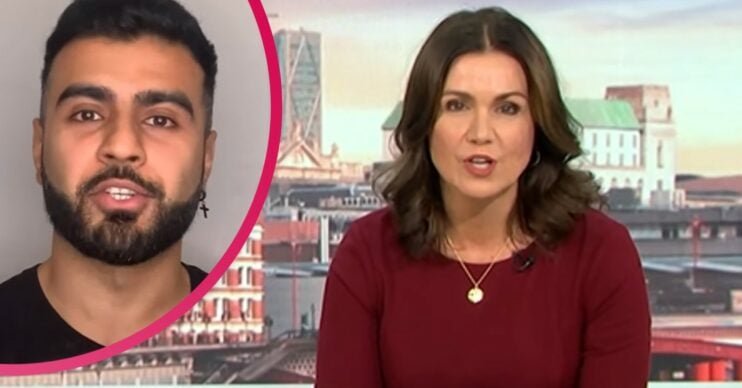 Viewers hit out at a “rude” guest on GMB today who called out Susanna Reid for interrupting him.

Along with presenter Adil Ray, the foursome discussed long-running Male and Female awards being replaced with a single Artist of the Year prize for 2022.

The debate soon had viewers flocking to Twitter when Aamir shot down Susanna for talking over him.

Susanna tried to lead the discussion towards how things can be more inclusive, citing the supposed gender neutral Booker Prize for having a men-only shortlist one year.

Aamir was not backing down from the point he was trying to make though and what followed was several moments of awkward viewing as they both continued to speak.

After Susanna had finished her question, Aamir said: “I’d appreciate not being interrupted seeing as India and I are having a healthy debate here, thank you.”

Susanna made a ‘not very impressed’ face while Aamir went on to make his point.

But he became even more cross when Adil said: “I’m going to take the option to interrupt because I really don’t get it.”

Aamir fumed: “Well, I disagree and if I stop being interrupted and I’m allowed to finish my point, that would be fabulous, thank you.”

Eventually Adil and Susanna were forced to cut away from the ranting podcaster while GMB fans rushed to slam Aamir for his rudeness earlier today.

One watcher tweeted: “How rude is Aamir Hassan. Is he just trying to make a name for himself?”

Another said: “Aamir was abrupt and rude, he wasn’t letting anyone else speak.”

One tweeted: “Aamir was being rude. He was contradicting his own points and generally being catty.”

How rude is Aamir Hassan. Is he just trying to make a name for himself. Fame hungry whore #gmb

Aamir was abrupt and rude, he wasn’t letting anyone else speak.
Glad #gmb cut him off whilst he was rambling on

Aamir trying to look hard and edgy on telly bless him, he was just rude! 😂#gmb

Read more: I’m A Celebrity’s Arlene under fire for comments about OCD

“Aamir trying to look hard and edgy on telly bless him, he was just rude!” wrote another.

Some viewers thought that it was Susanna in the wrong though, defending Aamir’s comments.

“I do find it incredibly rude #GMB cutting away from an interview whilst someone is still speaking. If your presenters didn’t ask such long question, you’d get the reply you’re looking for!” tweeted one.