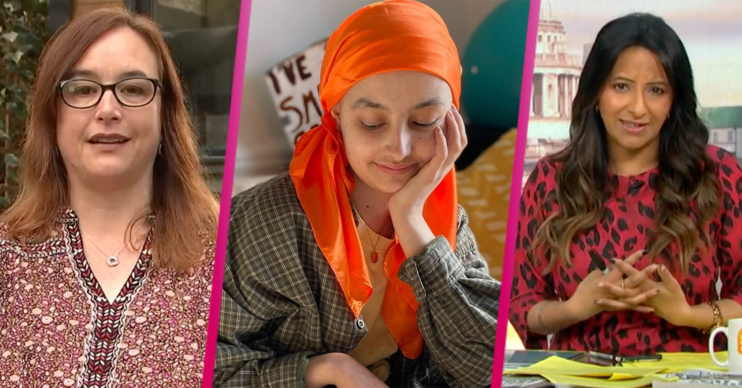 She couldn't say goodbye to many of her loved ones

GMB fans were today (April 13) left in tears as a grieving mother detailed her teenage daughter’s last moments as Boris Johnson ate cheese and wine at a Downing Street party.

Ruby Fuller was just 18 when she died on May 15 2020 after a short battle with blood cancer.

She explained: “Ruby Fuller died on May 15 2020 after short battle with blood cancer.

“It was the same day that Boris Johnson was pictured eating cheese and drinking wine in the gardens of Downing Street – despite lockdown rules.”

Teen declined treatment to avoid separation from her parents

Speaking to Emma, Ranvir explained that Ruby decided against having treatment because she didn’t want to be separated from her parents.

Emma revealed: “Until three weeks before Ruby died we thought she was going to get better. We thought treatment had cured her cancer.

Read more: Is Phillip Schofield still married to Steph? Does he have a new partner?

“So we were at home, it was lockdown and almost breathing a sigh of relief.”

However, she added: “But then at the end of April we got the devastating news that her cancer was back and it was back very aggressively and the doctors told us there was no hope of curing her.

Ruby said under no circumstances was she to be separated and alone. So she chose to be at home with us.

“They offered her some treatment that might have extended her life but that would’ve had to have been given in hospital and there was no guarantee one of us could be with her.

“So Ruby said under no circumstances was she to be separated and alone, so she chose to be at home with us.”

Emma added: “It was just the four of us in our bubble at home. She couldn’t see friends, she couldn’t say goodbye to them in person and that was incredibly hard.”

Ranvir then asked about Ruby’s grandparents and the fact that they “couldn’t hug them goodbye”.

“We considered approaching her grandparents, she was desperate to see them,” Emma said.

“We talked about whether we should ask them to break the rules and come and see her but Ruby was very very clear.

“She’d always been someone who followed the rules and she wanted to do the right thing and she didn’t want to put them at risk.

“She knew she was going to die and the last thing she wanted was to put anyone else at risk.”

Emma then called for the Prime Minister to resign.

“He absolutely has to resign, without a shadow of a doubt.

“He’s been shown to have broken the law, he broke the law that he set, that he was telling us on a daily basis that we had to follow and then he’s lied about it in Parliament, over and over again.

“And not just lied, he has smirked, he has made light of it, he’s joked about it.

“It’s utterly infuriating, it’s despicable behaviour and he shows utter contempt for the hundreds of thousands of people who made enormous sacrifices following those rules and he has to go.”

GMB viewers were left heartbroken by Emma’s emotional appearance on the show today.

One said: “The story of Emma Jones on #GMB this morning is heartbreaking. It’s all anyone needs to hear to understand the public outrage at the leaders of this country breaking the rules they broke.”

“She couldn’t hug her grandparents goodbye. Yet all the while the very people who were making the rules were partying the time away,” said a second.

“I’m so sorry for your loss, Emma,” said another emotional viewer. “May Ruby rest in peace.”

“This mum had to watch her daughter die without her grandparents being able to visit their grandchild? Absolutely heartbreaking,” another concluded.

What did you think of the interview on GMB today? Tell us on our Facebook page @EntertainmentDailyFix.