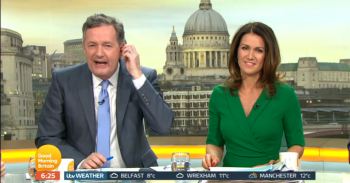 GMB ‘taken off air’ as Piers Morgan lashes out at producers

He even jokingly threatened to leave the show!

Good Morning Britain producers pretended to pull the show off air as Piers Morgan had a go at them for “barking” orders at him.

On Wednesday’s show, Piers took aim at the show’s producers and even jokingly threatened to leave ITV and move to the BBC.

As Piers and co-host Susanna Reid were running behind schedule during the opening segment, the producers appeared to tell Piers to wrap it up through his ear piece.

“Here’s what I am going to do about it,” Piers added, as he pulled his ear piece out.

“Now I can’t hear them, and there’s quiet in my ear. No one barking away going ‘nine minutes over!’

“We have two hours left, it doesn’t matter that we are ten minutes over – over what?! They’re like parrots in my ear.”

Jokingly mocking Piers’ ranting, the producers then took the pair off air by putting an image across the screen which read “technical difficulties”.

Susanna said: “They’re getting their own back!”

But Piers hit back: “It is incredibly annoying, that’s what the public can’t hear – they can’t hear these people yapping in our ears all of the time.

“The admiration for what we do despite the barking and yapping would be extraordinary.”

Susanna said: “Can I just say, we couldn’t do it without everyone in the gallery.”

Piers replied: “I could actually. I could just go and work somewhere else and literally do it without them.

“I would go to the BBC and revive their dormant morning show that nobody watches any more, and I’d literally be doing it without them.”

This isn’t the first time Piers has caused a scene after producers told him to hurry up as he was running behind schedule.

During an episode of the show in November last year, Piers said: “Apparently we’re ten minutes over on the programme.

He continued: “The show is always two-and-a-half hours and it will be whatever we decide it will be!

Do you enjoy watching Piers on GMB? Leave us a comment on our Facebook page @EntertainmentDailyFix and let us know.