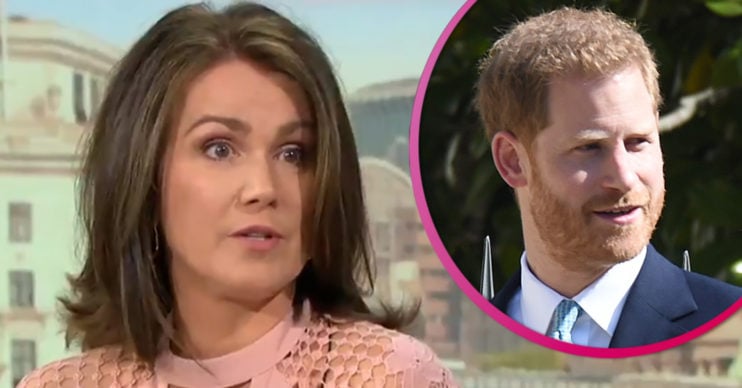 Recently, Harry appeared to take a swipe at his father Prince Charles

During a recent interview on Dax Shepard’s Armchair Expert podcast, the Duke of Sussex said he wanted to ‘break the cycle’ of “genetic pain”.

What did Susanna Reid say about Prince Harry on GMB?

Susanna said: “You’re dragging your family into criticism, don’t you?

“Anyone who goes into therapy is going to be drawn into a discussion about their parenting but I’m not sure your parents want to hear that discussion.”

Susanna’s co-star Adil Ray then cut in: “The bit about Prince Charles is about 20 seconds.”

Susanna replied: “It’s not 20 seconds, Adil. He discusses it for longer than that.”

Adil continued: Well, he talks about a more general thing.

“He doesn’t want to be a part of the royal family, he said that when he was 20 he’s got the power, he’s got the influence, he says ‘well what can I do?’

She said: “It’s so personal – I absolutely support him talking about mental health.

It comes after Harry spoke about how he doesn’t want to pass on any suffering to his own children.

He said during the podcast last week: “I don’t think we should be pointing the finger or blaming anybody…

What did Harry say in the podcast?

In addition, he said his father has “treated me the way he was treated”.

What do you think about Harry’s comments? Let us know what you think on our Facebook page @EntertainmentDailyFix.