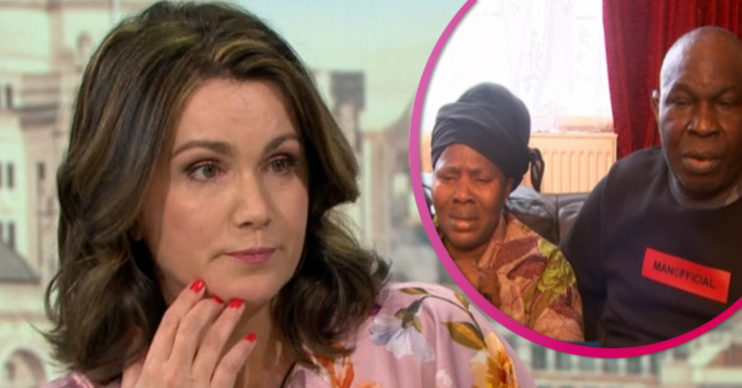 GMB: Susanna Reid breaks down over death of Jimi Olubunmi-Adewole who tried to save woman from Thames

GMB host Susanna Reid struggled to fight back tears as she spoke to the grieving parents of Folajimi Olubunmi-Adewole.

Folajimi – known as Jimi – tragically lost his life trying to save a woman from the River Thames around midnight on Saturday.

The woman had fallen from London Bridge and Jimi entered the water to try and save her.

However, Jimi’s body was recovered about six hours and now his parents have spoken about his incredible bravery to help the woman on Good Morning Britain.

His mother Olasunkanmi Adewole broke down in tears as she and Jimi’s dad Michael Adewola spoke about the “love” he showed to people.

His tearful mum said: “He had a good heart.”

Michael added that he wants the government to “honour” his son amid a campaign to get Jimi a posthumous George Cross.

Meanwhile, Michael also said Jimi was the “breadwinner” of the house and he looked after his mother and father.

What did Susanna Reid say?

Susanna became emotional as she told Jimi’s grieving parents: “Honestly, the tragedy your family has suffered is unimaginable.

“But what you’re saying is Jimi was motivated and inspired to help other people and that’s what happened on Friday night.

“I mean my heart is absolutely broken…” as she paused.

A tearful Susanna continued: “It’s broken for you as parents,” before becoming choked up.

Jimi’s father said: “He was the breadwinner of the house. This boy was taking care of me.”

Susanna and Adil were then joined by Jimi’s best friend Bernand, who was with him on the night the incident happened.

He said Jimi was adamant he was going to save the woman.

Susanna became tearful again as she said: “I find it hard but it’s impossible for you.”

Bernard later broke down as a video he took showed Jimi dancing.

Read more: What do all the GMB hosts earn? How much do Susanna Reid and Adil Ray take home?

Bernard said: “I’m proud to have at least crossed his path.”

Viewers were heartbroken watching the interviews.

Folajimi Olubunmi-Adewole lost his life saving a woman from the Thames.

Folajimi’s dad Michael is calling for the government to honour his son.

There is a campaign to get Jimi a posthumous George Cross. pic.twitter.com/1gFZTj0y0W

One person said: “Heartbreaking. The pain in his mother and fathers voice.”

Another wrote: “This has reduced me to tears, what an emotional interview.”

One added: “My deepest condolences for your loss I am crying. We need to get him a hero’s award of some kind.”