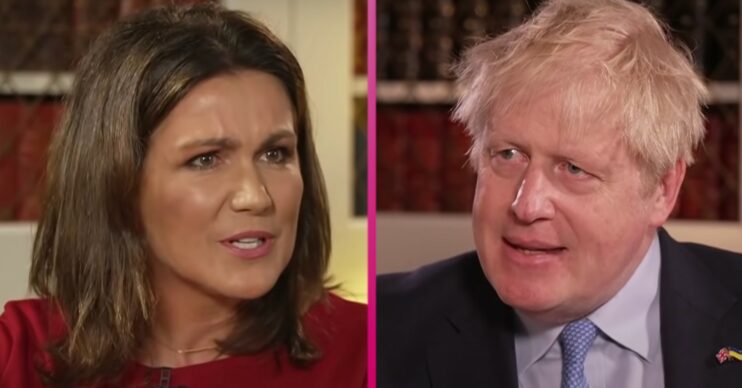 GMB host Susanna Reid’s interview with Boris Johnson has been hit by a number of Ofcom complaints.

The interview, which aired on Good Morning Britain last week, has been branded a “car crash” for the Prime Minister.

The last time the PM had been interviewed by the ITV morning show was back in 2017. He also famously hid in a fridge back in 2019 to avoid being questioned by Susanna and Piers Morgan.

During the interview, Susanna grilled Johnson on a number of topics, including the cost of living crisis and the government’s handling of COVID-19.

She also asked the Prime Minister how he had remained in power, despite breaking COVID guidance.

During the interview, Susanna asked: “Are you honest, Prime Minister?”

“Yes, and I think the best way to judge that is to look at what this government says it’s going to do and what it does,” the PM replied.

Susanna’s interview with the Prime Minister

Mr. Johnson responded, saying: “Yes, and er, I do my best to represent faithfully and accurately what I believe, and sometimes it’s controversial and sometimes it offends people, but that’s what I do.”

Later in the interview, the Prime Minister admitted that the government could have been faster with helping Ukrainian refugees.

Elsewhere, Susanna also called the PM out on the fact that older people are having to choose between being warm and eating.

This is due to the cost of living crisis.

It has since been revealed that Ofcom received 87 complaints following Susanna’s interview with the PM.

Plenty of viewers took to Twitter after the interview to slam Susanna and GMB.

“This isn’t an interview by @GMB it’s @susannareid100 trying to sway people’s voting on Thursday,” one viewer ranted, referring to the local elections.

“Sorry but this needs to be looked at at a much higher level than @Ofcom. This is disgusting.”

“This interview is a disgrace,” another viewer fumed. “Your bias is terrible and you are not a balanced journalist!! Unacceptable!!”

However, Susanna got plenty of praise following the interview.

“Great to see Susanna Reid absolutely wipe the floor with Boris this morning!” one viewer said.

As a result, TV watchdog Ofcom has confirmed that 87 people complained about the Prime Minister’s interview.