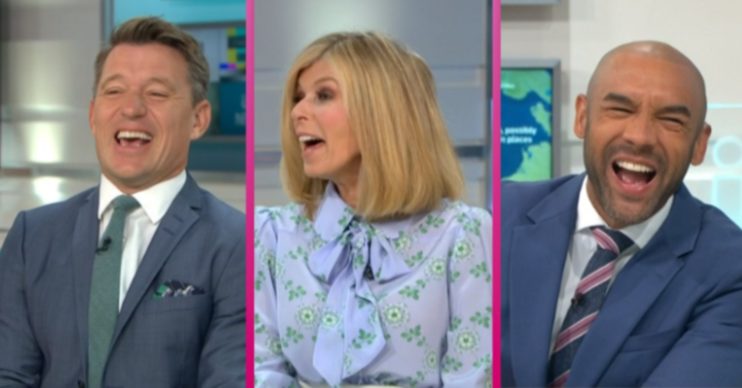 As the show got underway

GMB presenter Kate Garraway called on viewers to take a side after her co-host Ben Shephard mocked her for making a blunder with her phone live on air.

As today’s (Monday, August 3) episode of Good Morning Britain got underway, Ben couldn’t help poking fun at Kate as her phone vibrated loudly, almost distracting them as they introduced the upcoming segments.

What happened with Kate’s phone on GMB?

Ben laughed as he pulled Kate up on it and advised her to have vibrate turned off on her phone – but Kate argued that viewers couldn’t hear it.

He said: “I’m not sure if you noticed that but literally as Kate was talking about Caitlyn Jenner, her phone binged.”

“Yep, my bottom buzzed,” Kate said. “It was Cait [Jenner] saying, ‘Ooh, looking forward to speaking to you’.

“Have you now turned your phone off?” Ben asked her. She insisted she had already, so Ben said to their GMB co-star Alex Beresford: “Can we just have consensus? Alex, did she turn her phone off?”

Can we just have consensus?

“I don’t think it was Kate, sorry,” Alex admitted.

That prompted Kate to say: “Last week you told me to turn the vibrate off silent! And then when I left the studio on Tuesday, and lost my phone, what can I do? Because I ring it and it vibrates…”

“Unfortunately when that happens when we’re on air, though…” Ben pressed. “And it’s vibrating around your bottom?”

Kate then issued a plea for viewers to take their side in the debate. She asked: “If you can hear it at home, I’ll turn the vibrate off. If [not], I’m happy to carry on.”

“Phones on silent, everyone,” Ben said, determined to have the last word.