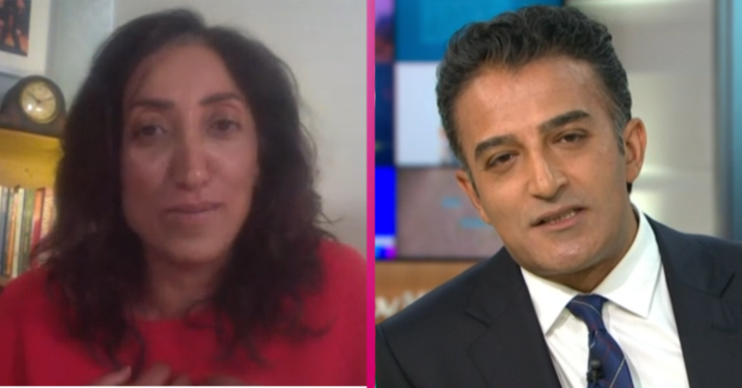 Shazia Mirza says people who aren't from Birmingham should 'shut up'

GMB fans have ridiculed a comedian for finding jokes about the Brummie accent offensive.

Shazia Mirza appeared on Good Morning Britain today (July 29) and told people who aren’t from Birmingham to “shut up” when it comes to Brummie jokes.

“[People] are not entitled to [tell Brummie jokes] if they’re not from Birmingham and they should just shut up about it.”

Shazia, who is from Birmingham, explained that she includes Brummie jokes in her act.

But despite being from the city, she’s received complaints for making quips at Birmingham’s expense.

“The thing is I am a comedian and I do jokes about Birmingham but every time I do, people from Birmingham come down on me like a tonne of bricks,” she said.

“And they go, ‘Why are you running down the city? Other people do that enough as it is so why are you adding to that?’

“But I  think that as someone from Birmingham, that’s my experience so I’m allowed to make those jokes.

“If you’re not from Birmingham, it’s not your experience so you shouldn’t make the jokes.”

Should Brummie jokes be banned?

Shazia then gave viewers a taste of the Brummie jokes she makes within her comedy act.

“I am from Birmingham, obviously I don’t live there anymore as I’m doing well,” she laughed. “And I don’t know why people are ashamed to say they’re from Birmingham. It looks nice now that it’s finished.”

He said: “It just doesn’t bother me at all. Those jokes were pretty poor whatever accent they were mocking.

“For me, I’ve never heard people really object too much to Burmmie jokes.”

Viewers tuning in at home were quick to take to Twitter afterwards to agree with Adrian.

One wrote: “Oh God stop being offended by everything. Seriously the world’s now a worse off place for political correctness crap.”

Another then tweeted: “Why not? If you’re offended over jokes, then I’d suggest you get a sense of humour.”

Moments later, a third commented: “So….. @GMB is it ok for only Essex people to tell Essex jokes? The worlds gone blooming mad!”

Shortly after, a fourth added: “@GMB jokes are jokes. People need to understand that. Plus if I wanna joke about anywhere I CAN. Who are you to say I can’t??my life my opinion.”

Are you offended by Brummie jokes? Visit our Facebook page @EntertainmentDailyFix and let us know what you think of this story.