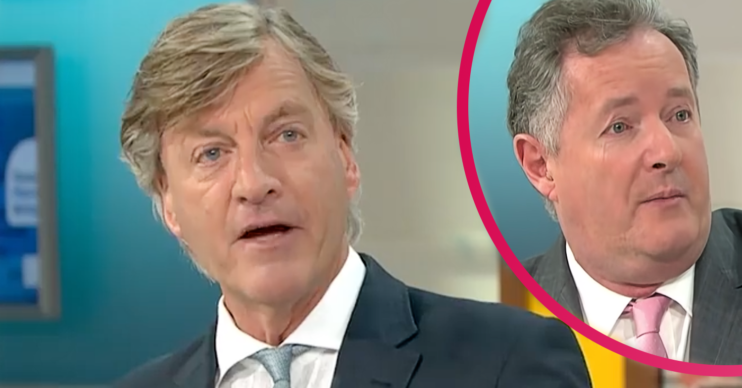 He said he hasn’t been on the show “since last March” and appeared to reveal that he was due to fill in for Piers Morgan before the pandemic hit.

What did Richard Madeley say on GMB this morning?

His co-host Charlotte Hawkins welcomed Richard back to the show and he said it was lovely to be back.

Read more: GMB: Piers Morgan claims he was ‘approached’ about return in wake of slumping ratings

Richard said: “I reckon it’s been since last March. I was meant to come back in April and May because Piers was meant to be going to America.

“So I would have been sitting alongside you quite a lot then, but all that went west and here I am.”

Viewers had a mixed response to Richard being back on the show, with some people even switching off.

One person said on Twitter: “I see they are still trying to shove Richard M at us I switched off straight away he’s not my cup of tea at that time in the morning.”

A third said: “Well that’s me switched off can’t stand that Richard Madeley.”

Meanwhile, with his often random outbursts, some even said he had fully morphed into Steve Coogan’s fictional TV host, Alan Partridge.

After offering a strange take during a discussion about Covid travel restrictions, viewers took to Twitter.

One said: “Richard Madeley gets more like Alan Partridge every time he’s on the telly.”

However, others loved having Richard and Charlotte on the programme.

Another added: “Finally a non-shouting presenter! First time this week I haven’t turned off. Well done @GMB giving us @richardm56 and not a headache to start our mornings!”

One commented: “@richardm56 love you [on] @GMB wish you were a permanent member of the team.”

What’s the latest on Piers?

Only last month Piers claimed that he had been approached by a member of the GMB team to sensationally return to the show.

He told The Sun: “I have had some quite random third-party feelers put out to see if I would consider a return to the show.

“As the Americans say, they reached out — there have been approaches to test the water in the wake of their obvious ratings issues.”

Richard recently said he’s yet to receive a call from GMB for Piers’ job.

However, he said: “Whether I’m going to be asked to take over, I have no idea.

“The bookies have me down as the front-runner and there have been opinion polls where I’ve come out reasonably well, but there’s a huge difference between that and it being a reality.”