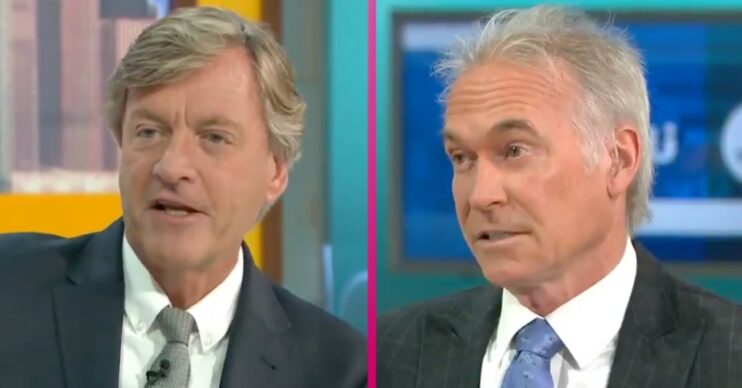 The presenter returned to the ITV show on Monday

The presenter is back on the ITV panel alongside co-host Susanna Reid, following a two-week stint last month.

And it appears Richard has already rustled a few feathers upon his return.

What did Richard Madeley say?

He started: “This is the first show I’ve come in thinking we’ve basically got nothing but good news – the football, the 19th… we can relax and celebrate a bit.”

However, Susanna and Dr Hilary appeared to disagree.

Meanwhile, the resident medic shared: “Look, in Australia, they’ve got a fraction of the cases we have and half the country’s in lockdown.

“Here we’re thinking of banning all restrictions and when we’ve got cases going up 74 percent in a week and 55 percent of hospitalisations are up in a week.”

Richard, 65, then added: “You’re using percentages to make a case here but don’t you think that’s a bit misleading?

“The percentage rise has gone up, it sounds a lot but in real numbers it’s not a lot.”

“We’ve got a variant that is more transmissible. And as some experts have said, it’s a factory to develop new variants.”

It isn’t the first time the pair have clashed on the show.

Last month, the two came face to face as they discussed the easing of lockdown restrictions.

How did GMB viewers react today?

Meanwhile, viewers at home were divided over Richard’s views.

One critic said: “Why is Richard Madeley on my TV arguing with Dr Hilary about medical matters? Maybe they’ll employ me to talk crap about astrophysics, as I am as qualified as he is.”

A second added: “He thinks because he knows a doctor he is one.”

A third agreed: “Imagine arguing with a doctor about Covid!”

Another wrote: “Richard Madeley thinks he knows everything but he doesn’t…”

However, others defended Richard.

Let me guess, he's been dishing out hard facts and common sense, and maybe slapped that tyrannical fool Hilary down again

One fan shared: “Dr Hilary changes his tune like the wind, masks off, masks on, even advocated wearing masks in the sea, ended all credibility with that one.”

Another tweeted: “To be fair, any armchair medic is probably better informed than Dr Hilary.”

A third commented: “I think he’s just putting across the views of those who aren’t prepared to put up with the rank hypocrisy the government has shown.”

“Well done Richard for reminding Dr Doom that we are now vaccinated and in a completely different position to Australia,” a fourth waded in.