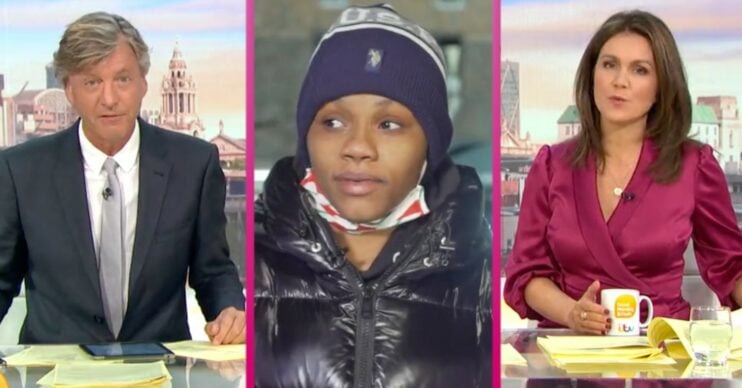 Some of those watching Monday’s (January 10) show expressed on social media they felt some questions were ‘inappropriate’.

Others claimed on social media that interviewee Winter Thomas appeared ‘traumatised’ in the segment and was ‘being exploited’.

Winter, 20, spoke with Richard and Susanna from the Bronx and explained how she escaped the devastating fire.

At least 19 people – including nine children – are dead after the blaze ripped through a NY apartment block. It is believed to have been started by an electric heater.

More than 60 people were injured after jumping out of windows to escape the fire. And 13 people are currently in critical condition in the hospital, according to reports.

Winter shared how she was woken up by the screams of her younger sister as smoke filled their home. And while her family managed to get out safely, Winter said she had seen her childhood friend ‘dead on the pavement’ outside.

‘It was very devastating.’

Winter Thomas, who escaped the fire at an apartment block in New York with her mother and siblings tells @susannareid100 and @richardm56 about the moment she realised the impact of the fire. pic.twitter.com/GBuhgSLDRT

Richard then asked: “Well presumably then, they wouldn’t stand a chance, would they?”

She continued: “I’ve never seen so many dead bodies in my life. I saw dead people and kids lying dead on the floor.”

However, Richard’s enquiry as to ‘what the worst part was’ did not go down well with viewers.

Susanna also came under fire for her interviewing approach.

Furious social media users were outraged by the segment.

“What a disgrace of an interview,” one Twitter user fumed.

“To survive the disaster of the fire then forced to relive the nightmare as you throw harrowing questions at her hours after the experience. Wow!”

Another upset viewer tweeted: “Very inappropriate and insensitive interview, asking how many floors people jumped and what the lady saw. Have some respect for those who lost their lives.”

Another wrote: “Stop already!! How insensitive Richard is asking these questions to such a young person just out of a fire.”

Others took aim at the hosts by name.

One person added: “How can you ask that poor girl about people jumping out the windows, she’s already distressed enough. She doesn’t need to be recalling it for Richard Madley. Disgraceful. She’s in shock!”

Someone else agreed: “Disgraceful interview. The poor girl is obviously in shock and shouldn’t be hauled in front of the cameras.”

Others took to Twitter to praise Winter for her bravery, as one said: “Winter you did amazingly and are so brave.”

Another added: “Winter was amazing this morning. So clear and articulate considering the trauma she’d been through just hours earlier.”