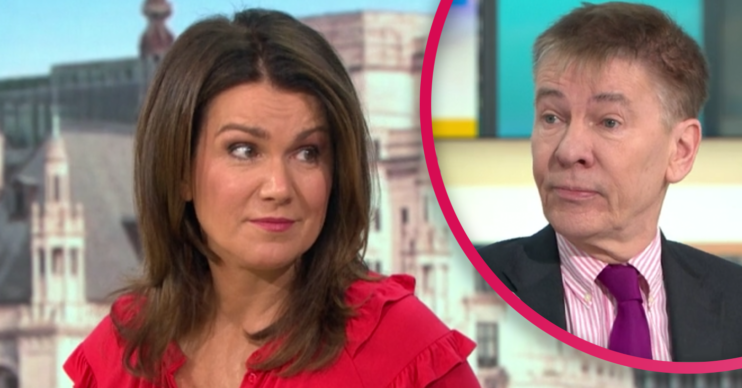 GMB viewers have called for one of the show’s regular contributors to be banned after he “showed his true colours”.

The calls were made on social media this morning (March 16) after Richard Madeley and Susanna Reid hosted a debate on the UK’s plan to buy its oil and gas from Saudi Arabia.

Susanna explained: “We can’t rely on Russia for energy so we’re going to Saudi for it.”

Richard and Susanna welcomed the Daily Mail’s consultant editor Andrew Pierce and Kevin Maguire from the Daily Mirror to GMB.

Pierce – an avid Conservative – went up against Maguire, and even Susanna seemed a little shocked at the exchange.

With Boris Johnson visiting Saudi Arabia, he was accused of “turning a blind eye to war crimes by Saudia Arabia in the Yemen” by Kevin Maguire.

Asked where he would rather the UK gets its energy, he replied that he wanted to “resume trade with Russia” once the war is over.

“Saudi Arabia has supported that civil war, as has Britain, as have about 11 other countries including the United States,” countered Pierce.

He added: “I’m afraid there’s bad and there’s evil. Russia is evil, Saudi Arabia is not as evil.”

‘Pick your wars and pick your victims’

It was then that things took even more of a turn between the two guests.

Read more: GMB viewers ‘turn off till Ben and Kate are back’ over Richard Madeley’s habit

“If you carry on with Russia putting up oil prices as much as they are you’re bankrolling Putin’s war,” said Pierce.

“Every time we’re buying gas and oil from Russia, we are bankrolling their war.

“It’s better to buy from Saudi Arabia than Russia because it’s supporting the war in Ukraine.”

“So again, just come back,” said Maguire. “So you condemn Putin for killing children, bombing hospitals”

“It’s pick your wars and pick your victims,” said Susanna.

Susanna then explained that 81 people were executed in Saudi Arabia in just one day.

“You do business with America and they’ve got the death penalty. What’s the difference?” asked Pierce.

“Saudi Arabia is a country without fair trials,” said Maguire.

Pierce, however, was left unconvinced and, as Richard moved the debate on, he threw his weight behind the Prime Minister.

There weren’t many viewers on Twitter who shared Andrew Pierce’s views, it has to be said.

“A sickening defence of the hundreds of thousands dead in Yemen by Andrew Pierce,” they added.

“Listening to Andrew Pierce @GMB is bad enough, but his defence of a murderous totalitarian regime in Saudi Arabia is hideous.

“The Saudis execute people without trial, how anyone can defend this nation considering its appalling human rights record is shameful,” they added.

“Andrew pierce on #gmb is a idiot,” said another.

‘It is grotesque double standards.’

‘If you allow Russia to continue putting up gas & oil prices as they are, you are bankrolling Putin’s war.’

Boris Johnson will meet the Crown Prince days after a huge public execution in Saudi Arabia as he seeks to boost Gulf oil production. pic.twitter.com/TFBEpD4B7v

“Kevin Maguire is the only one talking sense. Shouting ‘Go Boris’ like he’s a messiah,” they added.

“The death toll in Yemen is over 100,000. How dare Andrew Pierce say Russia is worse than them?” another commented.

“The sheer desperation of Andrew Pierce comparing Saudi Arabia mass executions with the death penalty in America. Get him off. It’s embarrassing,” said another.

Another tweeted the show to plead: “Do not invite @toryboypierce back on. His true colours have been shown.”

Others seemed to agree, labelling the journalist a “disgrace”.

“#Andrewpierce is a disgrace. Showing his true colours,” said one.

What did you think of the debate? Head to our Facebook page @EntertainmentDailyFix and tell us.