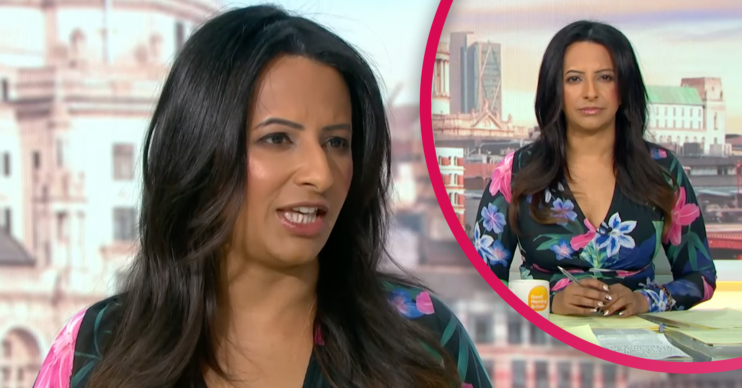 GMB host Ranvir Singh has angered viewers after it was reported she had quit her role on the breakfast news show.

News reports yesterday (February 14) claimed that Ranvir had quit her role as the show’s political editor.

And it’s this – as well as her dislike of standing freezing on the PM’s doorstep – that sources say has led to her decision to step down.

Read more: Richard Madely under fire for second day over his ‘rudeness’

According to The Sun, Ranvir is looking for a bigger role on the breakfast news show.

A source said: “Ranvir is ready for a new challenge at Good Morning Britain and she wants a bigger role within the team.”

They added: “She quietly stepped down as the political editor of the show in anticipation of having a more substantial part to play.

“She is a hugely popular member of GMB. Keeping Ranvir on board is something everyone wants. However, to keep her the job – and pay – will have to be right,” they concluded.

How did GMB viewers react to the Ranvir news?

Ranvir’s apparent decision to quit and go after a new role on the show doesn’t seem to have gone down too well with some viewers.

Read more: Ranvir Singh fights back tears as she pays tribute to GMB colleague who died at the weekend

“Surely when you are given a position by your bosses, you should not then tell them you want a better one, or else?” tweeted one irate GMB viewer.

Others said they’d “prefer” to have Kate Garraway or Charlotte Hawkins front the show.

Ranvir reflects on almost a decade at GMB

The reports came after Ranvir reflected on her time on the show.

Ranvir’s video showed her son Tushaan as a youngster being cuddled by the likes of Ben Shephard, Susanna Reid and Dr Hilary Jones.

She captioned the post: “When this pops up on your phone, and you realise you’ve been working with the same people for nearly a decade.”

ED! has contacted a rep or Ranvir for a comment on this story.