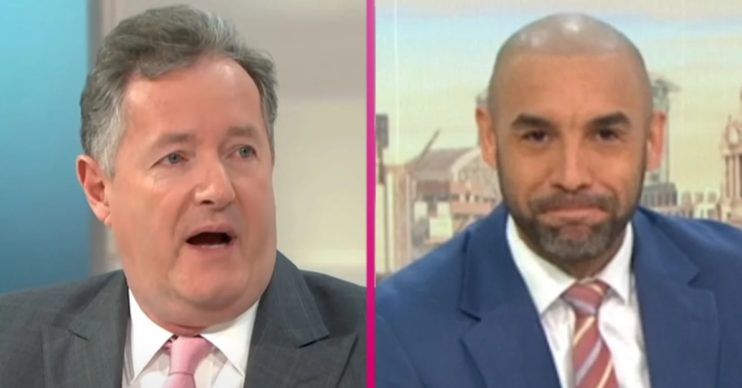 GMB has been hit with a string of Ofcom complaints after Piers Morgan was replaced by Alex Beresford last week.

Viewers of the ITV programme took issue as Alex presented alongside Kate Garraway during Friday’s edition (March 26) – just weeks after clashing with Piers.

The pair famously fell out over his comments about Prince Harry and Meghan Markle.

Following Alex’s appearance as co-presenter, the show has been hit with 28 complaints.

A spokesperson for Ofcom told ED!: “We are assessing the complaints against our broadcasting rules, but are yet to decide whether or not to investigate.”

When did Alex Beresford appear on GMB?

The star appeared on the programme last Friday and admitted he was happy to be back.

During the show, Kate said: “And you’ve had tumultuous times as well Alex, it’s lovely to have you here, it very much is.”

Alex then replied: “It’s good to be back.”

However, his appearance left some viewers divided on Twitter.

One tweeted: “Changed to BBC when Alex appeared. Miss Piers.”

A second shared: “As soon as Alex Beresford came on I turned to BBC. He should have left when Piers did.”

We are assessing the complaints against our broadcasting rules

But others were glad to see Alex behind the GMB desk.

One viewer shared: “Love Alex this morning. Move on people, Piers has gone.”

In addition, another wrote: “Rather have Alex than Piers, well done GMB, I’m back from the BBC.”

Meanwhile, it comes shortly after Piers lashed out at Alex in his recent Mail column.

In the lengthy piece, he accused the weather expert of “trying to make name for himself” during their onscreen row.

Furthermore, he claimed his feelings had been hurt by the clash, as he’d previously offered Alex career advice.

Speaking about their spat, he said: “I wasn’t going to sit there and take it from one of my own team, especially someone who I’ve gone out of my way to help whenever he’s asked me for advice about his career.”

He also referred to Alex as “GMB‘s occasional stand-in weatherman”.