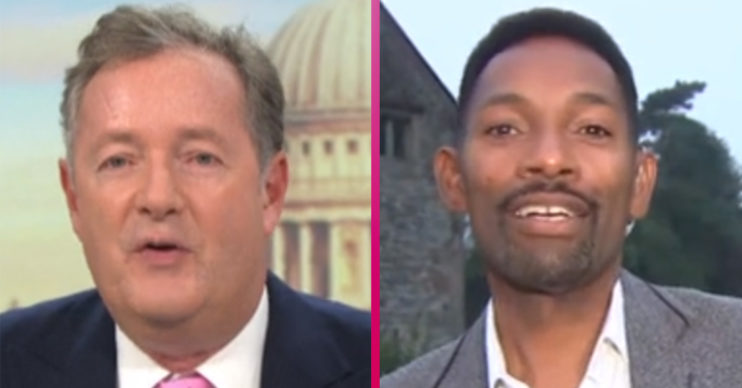 GMB host Piers Morgan clashed with the show‘s new weatherman Des Coleman after he was forced to rush into the studio early.

The 55-year-old presenter was getting his makeup done when Des finished his report early, leaving Piers panicked.

As the ITV show began, Piers was seen adjusting his jacket and microphone as co-host Susanna Reid sat behind the desk.

Why was Piers Morgan late on GMB?

When Susanna asked what was going on, Piers criticised Des for cutting his report short.

He said: “What’s the name of the new weather guy? Where is he? Rule one mate, you don’t end early.

“If I’m in makeup being beautified, you do not end early.”

Susanna quickly defended Des, saying: “I have to say, do not blame the weather presenter. It’s his first day. It is not his fault. The camera shot froze.”

Although Des wasn’t afraid to stand up to Piers himself.

He fired back: “Susanna, I love you, and Piers, it’s my first day and you can’t even cut a good looking young guy a break.”

Piers replied: “So far all I’ve heard you do is call yourself good looking. People who go on about how good looking they are tend to be speaking too much.”

One wrote: “@DESCOLEMAN come on Des, get @piersmorgan told! #GMB.”

It’s certainly been an eventful week for Piers, who was earlier targeted by co-stars Susanna and Dr Hilary over his weight.

The host explained he’d put on a bit of timber over lockdown and busting his ankle hadn’t helped.

Meanwhile, the conversation then moved on and Piers teased Dr Hilary for having a girl’s name.

In addition, the TV doctor shot back: “At least I’m not overweight.”