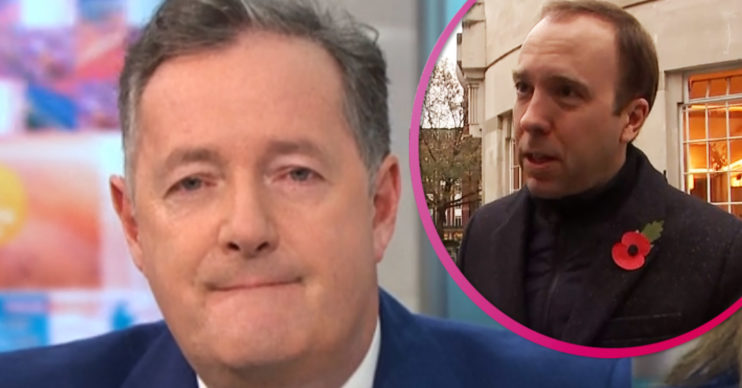 GMB ambushed Matt Hancock on today’s show as they quizzed him on boycotting the programme for 196 days.

The government has refused to appear on the show for almost 200 days after Piers’ explosive interviews with ministers earlier in the year.

However, on Tuesday, Mr Hancock was asked about the latest news on a coronavirus vaccine.

“I know it’s been a while since you’ve spoken to us but great news this morning about the vaccine. What can you tell us?”

When asked why he’s avoided and boycotted GMB for 196 days, he said: “I’m very happy to be talking to you this morning, especially as we have this promising news.

“I’m sure we can have this discussion…”

Nick cut in: “When will you come on and talk to Piers and Susanna? How about tomorrow?”

Mr Hancock replied: “I’ll come on as soon as I possibly can.”

I’m very happy to be talking to you this morning.

Nick said: “We’ll make a special slot for you tomorrow.”

The MP responded: “That’s very kind of you but unfortunately I have got something in the diary tomorrow morning.

Watch the moment we finally get a government minister to appear on GMB after 196 days. @NickdixonITV approaches Health Secretary Matt Hancock in London.

He speaks briefly but refuses to commit to appearing with @piersmorgan and @susannareid100. pic.twitter.com/HzhIRLUrCZ

“I’ve got an awful lot of work to do to get this vaccine rolled out,” as he walked away from the cameras.

However, Nick began following him and asking questions as Piers and Susanna giggled in the studio.

As he caught up with him, Nick asked: “Health Secretary, will you come on Good Morning Britain this week?

“Our viewers are desperately keen to hear about this wonderful news about the vaccine.”

However, Mr Hancock ignored Nick’s question and walked into the BBC building.

What did GMB viewers say about Matt Hancock?

Viewers were left cringing at the moment, with some branding it “awkward”.

One person said on Twitter: “OK so that made me cringe #GMB so funny. Well done Nick!”

Another wrote: “This is so awkward they’re just using Nick as a bodyguard to catch Hancock #gmb #cringe.”

One tweeted: “Well watching Matt Hancock literally run away from a #GMB interview has made my day.

“Seriously is quite appalling that he and other Government ministers won’t address the many #itv viewers though.”

This is so awkward they're just using Nick as a body guard to catch Hancock #gmb #cringe pic.twitter.com/BYRxfJ5mtV

Well watching Matt Hancock literally run away from a #GMB interview has made my day. Seriously is quite appalling that he and other government ministers won’t address the many #itv viewers though. @GMB