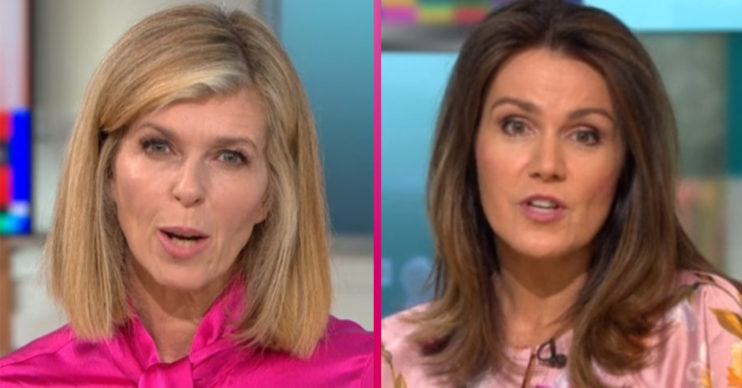 Kate called her the "wardrobe mistress"

Kate Garraway has thanked GMB colleague Susanna Reid for helping to get her son Billy back to school.

Kate, 53, returned to work today after a short break and revealed that Susanna had been a massive help during the summer holiday.

Wonderful to be back in the studio with @kategarraway ♥️ pic.twitter.com/etiBWO7byw

Kate and Susanna, 49, were reunited on the show.

How did Susanna help Kate Garraway?

“Last week you took some time off because it was a big week,” Susanna began a conversation between the two.

“It was a huge week, for children across the country, wasn’t it? Back into the school playground,” Kate said.

“Kind of, in a file, separate, and it was Bill’s first day at secondary school,” she explained.

“Susanna is smiling because you rang me, and you said ‘What can I do to help? I’ve been through this.'”

Kate continued: “I remember talking about this when your son went to secondary school.

“I just said: ‘At the moment I am trying to find trousers to fit,’ and you did a massive load, didn’t you?

“And sent me loads of appropriate wear.

“You became wardrobe mistress, it was brilliant, and we had a fantastic try on and I was filming Billy trying them on and at the end of it he went ‘Don’t show this on GMB’.”

Why was it a tough day for Kate?

Earlier, Kate revealed that it was a “tough day” for her because she was unable to see her husband, Derek, on their 15th wedding anniversary.

Derek, also 53, has been hospitalised since March after falling gravely ill with coronavirus.

After emerging from an induced coma, he’s still battling the terrifying after-effects of the virus.

Read more: Kate Garraway confirms when she will return to work so husband Derek ‘can hear her voice’

“I won’t be able to see him today,” Kate said, “I kind of hoped I would but it wouldn’t work out that way for a visit… but maybe it would be a bit strange anyway.”

“So yeah, it’s a tough day but he’s still here. There’s not a huge amount of change.”