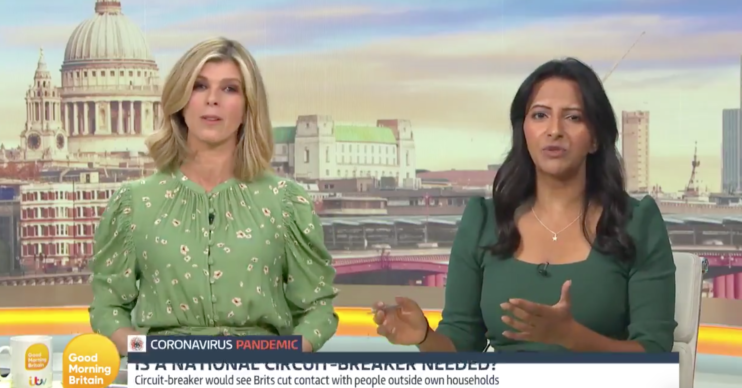 Some GMB viewers were left confused by Kate Garraway on Wednesday after she made a remark about Ranvir Singh that they deemed a tad insensitive.

Susanna Reid and Piers Morgan have taken time off during half term to recuperate, and they’ve left co-stars Kate and Ranvir Singh in charge of the show for the time being.

The harmless throwaway comment that got some fans hot under the collar came near to the close of the show.

The duo were chatting with a teenager from India who has taken the ballet world by storm and scored a place at a prestigious academy in London.

Kate asked their guest if he had any advice for Ranvir on her Strictly debut.

Some viewers then thought she questioned whether the pair were “related” when trying to justify asking him a question about her co-host.

Fans immediately rushed to social media to speculate if her comment was racially insensitive.

How racist are you kate not all indians are related to each other!!! What a idiot! #gmb

Must be the dance moves🙄🙈

It seems Kate and Ranvir were facing a tough crowd generally today.

They’d angered viewers earlier in the show during an interview with Labour MP Lisa Nandy.

Lisa appeared on the show to discuss the situation in Manchester following the Tory government decision to back out on the funding package they had originally offered.

Kate and Ranvir grilled the MP on what led Manchester’s mayor Andy Burnham to push the government for more funding.

The interview left viewers divided, with many rushing to social media to criticise the presenting duo for not letting Lisa finish her train of thought on multiple occasions.

So frustrating watching kate and ranvir. Questions take so long to ask and when the guest finally gets to answer they interrupt them. #GMB

Kate and Ranvir, for all their qualities, continue to interrupt expert interviewees before they have given a complete answer. It is a Morganism to think that a new question is of more interest than half an answer from an expert

However, with such a contentious issue, other viewers appreciated the MP being pressed.