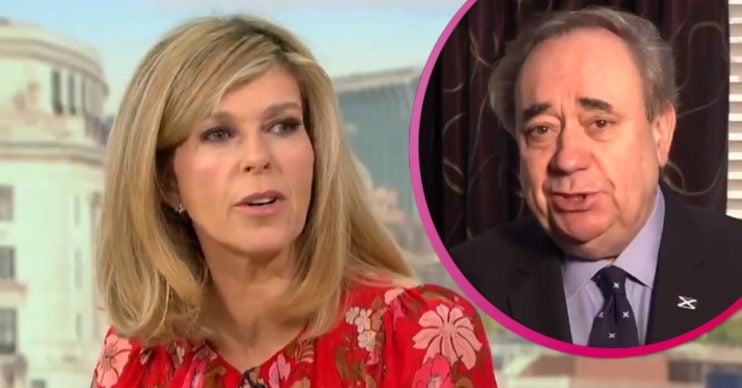 Viewers said she was "trying to be Piers Morgan"

The presenter, 53, divided fans as she clashed with the Scottish politician during this morning’s interview.

So much so, some viewers accused her of “trying to be Piers Morgan”.

'The national interest is above personalities.'

What happened with Kate Garraway and Alex Salmon on GMB today?

He has now started his new political party, Alba.

During their interview, Kate told Mr Salmond that “two-thirds disagreed” with the politician being fit to stand for election.

She asked: “Wouldn’t it help if you picked up the phone to Nicola Sturgeon? I think people will want to know if you can sort that out.”

Mr Salmond struggled to answer her questions, with a delay on the line making things more difficult.

This meant the pair started speaking over each other.

Mr Salmond chuckled: “Kate, if you keep interrupting me on a delayed line, it’s going to be very difficult to conduct the interview. Can you let me answer the question?”

It wasn’t long before divided viewers took to Twitter to express their views on the clash.

Another said: “Won’t be voting for him or his party but WILL be voting SNP and for Independence from this rancid “Union”.

“But Garraway’s arrogance and ignorance is staggering. Let people speak! This show just gets worse and worse.”

What an awful way to conduct an interview, so unprofessional.

“FFS, once you’ve asked a question SHUT UP and let your guest actually answer it.”

Finally, a fourth said: “What an awful way to conduct an interview, so unprofessional.”

What else did viewers say?

However, the reaction to her interviewing style went down well with some.

One wrote: “Well done Kate he is shameful.”

Another praised her by saying: “Well done @kategarraway didn’t take any of his waffle.”

A third commented: “You go girl #kategarraway #AlexSalmond is an awful man and his attitude to women stinks #AlbaParty.”