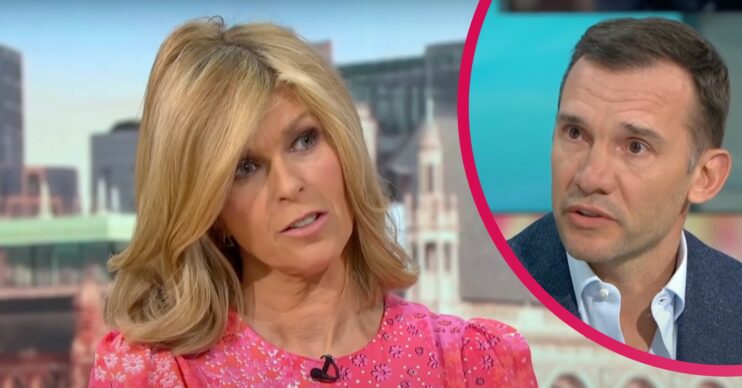 GMB hosts Kate Garraway and Ben Shephard were slammed by viewers during today’s show over their behaviour during an interview.

The duo were accused of “leading questions” during a chat with Ukrainian ex-footballer Andriy Shevchenko – and viewers weren’t happy.

Kate and Ben welcomed ex-footballer Andriy Shevchenko onto the show today to talk about the war in Ukraine.

He was also on to speak about how he is opening his doors to allow Ukrainian refugees to stay with him.

Andriy is the Ukraine National Team’s highest scorer. He also played for Chelsea FC between 2006 and 2009.

In 2006, he was the most expensive signing in British football, costing Roman Abramovich, the Russian oligarch who owned Chelsea FC, £30.8m.

Read more: GMB fans lay into ‘unprofessional’ Laura Tobin as she turns up late for work after night out

Abramovich, of course, has now been sanctioned by the UK government, who has seized his assets. T

his has had an effect on Chelsea FC, who can no longer operate as a business until they are no longer owned by the Russian.

After praising the Ukrainian people, army and president, Andriy was then asked about his opinion on the current situation Chelsea is in.

Andriy said he was sure Chelsea are “going to come through”. He then asked all fans, and people of the UK to “play their part” and do whatever they can to help Ukraine.

Andriy clearly wanted to talk about his campaign, however, Kate was quick to interrupt.

“We’re going to come on to your campaign in a moment,” she said. “But if you were still playing at Chelsea, as a Ukrainian, and you heard fans chanting Abramovich’s name, how would that feel?”

Andriy took a moment to think before saying: “I know, in Russia, there are so many people against the war.

Despite Andriy’s obvious reluctance to answer questions about Abramovich, Ben pressed on. “Would you prefer that Chelsea fans weren’t singing Abramovich’s name? Or are there unmitigated circumstances, do you feel?” he asked.

“I’m here to send a message across the world,” a clearly uncomfortable Andriy said. “To support my country, to help, to bring peace to my country.”

Following the interview, angry viewers took to Twitter to slam Kate and Ben.

Many were unhappy that they had tried to lead the interview, with some accusing them of wanting to get a “headline about Abramovich” from Andriy.

“@GMB very leading questions, you can tell Shevchenko doesn’t want to answer stop trying to press him. Where’s your tact?” another asked.

“#GMB Shevchenko’s family are getting bombed in Ukraine & Kate & Ben are more concerned with trying to get a viral soundbite out of him dunking on Abramovich. Absolute vultures!” another tweeted.

“Kate Garraway you should be ashamed of yourself for the line of questioning to Andriy Shevchenko,” another said.

One viewer found Andriy’s reluctance to answer strange, however.

“Weird how he kept changing the subject when asked to comment on Roman Abramovich,” they said.