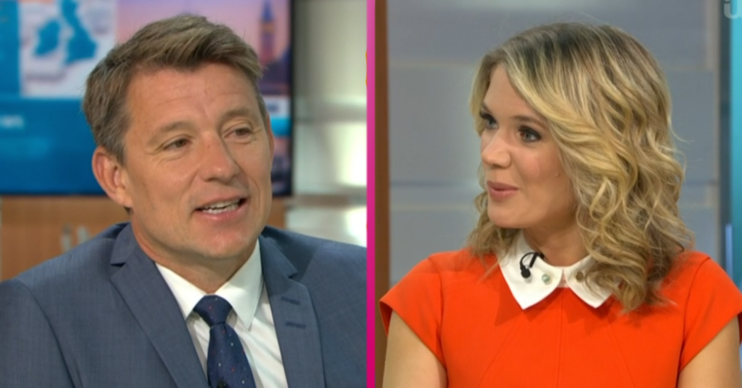 GMB fans lashed out at the programme over its coverage of Liverpool’s Premier League win today (June 26).

Viewers were infuriated by the contrast in reporting when it comes to social distancing.

While playing footage of LFC fans gathering in Liverpool, the hosts smiled as they congratulated the team on their win.

Smiling, Ben Shepherd said: “The 30 year wait is over!

Charlotte Hawkins, whose husband supports Liverpool, added:  “To finally lift that trophy especially after the league stopped and everyone was very worried because they were so close!

'They will plan a celebration in the coming weeks and months.'@MirrorDarren says Liverpool's manager Jürgen Klopp wants 'fans to stay safe' as they celebrate the Premier League title amid the coronavirus pandemic as he promises there will be an official celebration soon. pic.twitter.com/uvQZMJ9Xvm

“Was it going to be scrapped at the last minute and snatched away from them?

However, moments after reporting on the celebrations in Liverpool, the presenters’ tone changed dramatically when they reported on the mass gathering on Bournemouth beach yesterday.

Charlotte said: “Beaches could be closed all together after a major incident in Bournemouth when authorities was overwhelmed by tens of thousands of people flocking tot he coast.

“England’s chief medical officer is warning about this because he says the cases of coronavirus will go up again if people aren’t adhering to social distancing.”

Viewers tuning in at home called out the show for the contrast in reporting on social gatherings.

Some even. branded the Good Morning Britain team a “bunch of hypocrites”.

Taking to Twitter, one wrote: “Just reported the dangers of overcrowding on beaches. Now showing 1000 fans celebrating Liverpool win and not a thing said about social distancing … GMB = bunch of hypocrites.”

'There are huge numbers of people coming to beaches with a very clear mindset that coronavirus isn't an issue for them.'

As the government threatens to close beaches over fears of a second wave of coronavirus, @NickDixonITV is live in Bournemouth. pic.twitter.com/YWF1PsV2dw

Another then added: “@gmb @benshephard where is your balance!

“Critical of beach going yet non for football fans. Are they immune from COVID!! We want our lives back these people are stopping us”

Moments later, a third tweeted: “So in one report you are talking about the amount of people on Bournemouth beach. And how dangerous it is.

“Then you are showing footage of anfield with loads of people doing the same but not a single mention of the dangers.”

Shortly after, a fourth wrote: “@GMB beaches packed…bad news..liverpool fans celebrating not a mention of how they are not social distancing.”