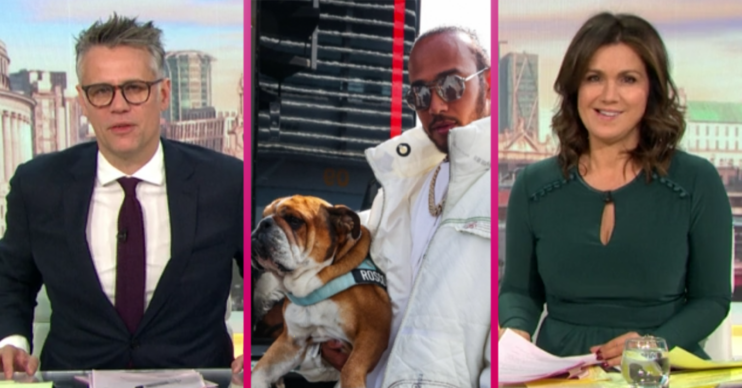 Roscoe isn't a meat eater to help the environment

Lewis wasn’t actually on the show, but he ended up being at the centre of a debate about feeding dogs a vegan diet.

What did GMB host Richard Bacon say about Lewis Hamilton?

Introducing one expert, who is pro giving dogs a vegan diet, Richard began: “Lewis Hamilton, I’m sure you’ll agree, has set a wonderful example – his dog is vegan.”

A picture of Roscoe then flashed up on screen and Richard added: “He’s taken a photo of his dog with a plate of fruit on a private jet.

“On a private jet. Doing an enormous amount for the environment.

“Maybe they cancel each other somehow?” he added.

And, after vegan dog owner Charlene McQuoid-Guess put her point across, so too did viewers.

Is it cruel to make dogs do #Veganuary ?

Dog owner Charlene McQuoid-Guess has two dogs who have a vegan diet.

She tells @susannareid100 and @richardpbacon that her dogs have ‘thrived’ from a vegan diet.

What do you think? pic.twitter.com/0NarMknbkc

What did GMB viewers say about dogs on a vegan diet?

GMB viewers seemed pretty unanimous in their verdict that feeding dogs a vegan diet is “cruel”.

They also branded Lewis a hypocrite for cutting meat from Roscoe’s diet to save the planet, while flying on a private jet.

“Lewis Hamilton banging on about cutting meat from a dog’s diet to help save the planet, whilst feeding his dog plant-based food whilst aboard his private jet…… You can’t write this [bleep]!” said one.

“Get over yourself,” they added.

“Love Lewis Hamilton…But that dog looks depressed looking at that fruit and veg,” said another.

“Lewis Hamilton has clearly breathed in too many fumes… My dog eats meat, fruit and vegetables.. if you really love your dog treat it like a dog,” said another.

“@LewisHamilton has gone too far feeding his dog vegan meals. That’s not his right to decide,” said another.

“If you’re a vegan it doesn’t mean your dog has to be. Use your [bleep]ing common sense,” urged another.

Others said that it was “cruelty at its highest level”.

“What a load of crap trying to turn a dog vegan? Cruelty at its highest level. Lewis Hamilton you are a disgrace promoting this crap,” said one angry viewer.

Another agreed that feeding a dog a vegan diet is “extremely cruel”.

So what did you think of the debate? Tell us on our Facebook page @EntertainmentDailyFix.