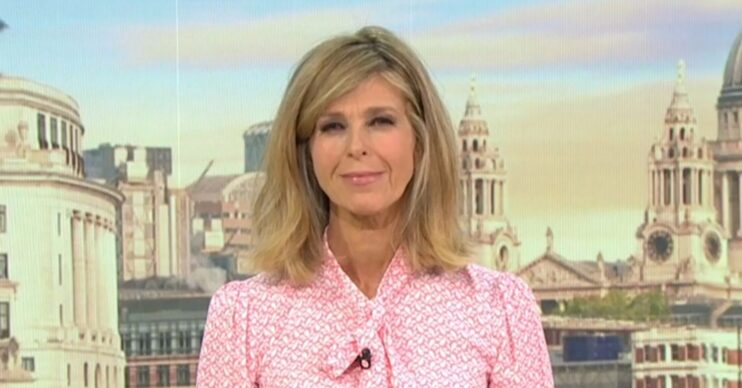 Kate admitted she suffered with a kidney infection

Kate Garraway has revealed that she fell ill with a kidney infection after filming her BBC Two show Walking With.

The show, which went out last night (November 10), followed Kate on an invigorating hike in the Cotswolds as she talked about her past year’s challenges and chatted to locals.

What did Kate Garraway say about falling ill on Walking With?

On Good Morning Britain today (November 11), Kate, 54, opened up to her co-hosts Ben Shephard and Susanna Reid about filming the nature documentary.

Read more: Kate Garraway opens up about ‘guilt’ over being away from Derek and the kids

She told them: “It was my first day without Derek and without Darcey and Billy, it was amazing, and I felt guilty and that I shouldn’t be there.”

But she did reveal that filming out in the countryside has helped her mental wellbeing.

She said: “I came back and felt incredibly refreshed.”

Kate suffered with a kidney Infection

However, the award-winning presenter explained that she became ill herself shortly after filming ended.

“I actually wasn’t feeling that well after that. I found out I had a kidney infection.

“But I didn’t know at the time, so the BBC aren’t in any way responsible!”

Kate then went on to discuss the therapeutic impact that filming in nature had on her, telling Ben and Susanna: “It’s hugely healing.

“The wonderful thing about nature is that it really kind of reminds you about the beauty of things.”

Earlier this week, it was confirmed that the TV star would be fronting a follow-up film to her National Television award-wining documentary Finding Derek.

Her husband, Derek Draper, contracted coronavirus back in early 2020, which led to him spending 20 months in hospital struggling with the virus.

The show will be entitled Caring for Derek, and follow Kate and her family through her realities of life with Derek home from the hospital, and is set to air in early 2022.