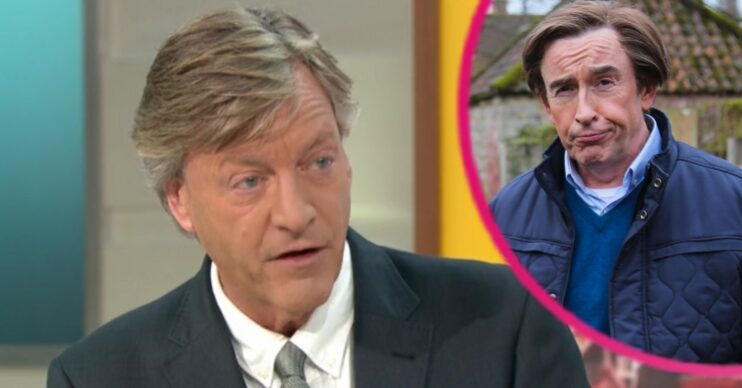 'It’s almost like Richard is doing a Partridge tribute!'

GMB presenter Richard Madeley has found himself likened to Alan Partridge yet again.

The 65-year-old TV star is regularly compared to Steve Coogan’s comic creation over his remarks.

But it appears Richard managed to outdo himself on the ITV programme earlier today (July 14).

What did Richard Madeley say?

Dexter reduced the panel to tears this week following his letter to England star Marcus Rashford.

The youngster said on the show: “After the penalty shootout I was afraid he was feeling sad because people were being mean about him being black.

“I wanted to cheer him up.”

Richard responded: “Well you certainly did that.”

The host then went on to discuss Marcus’ missed penalty against Italy.

Speaking to Dexter, he added: “So you know what it feels like, don’t you? Because it’s horrible and really he should have scored shouldn’t he?

“That’s the whole point of a penalty. It’s meant to be an easy shot at goal.”

The moment didn’t go unnoticed with viewers, who were quick to comment on his penalty remark.

One said: “An easy shot at goal? I bet Madeley has never kicked a football in his life, total Partridge!”

A second added: “Richard Madeley telling a nine year old kid on national TV that he should score his penalties because they’re an easy shot is peak Richard Madeley.”

My thoughts are with Judy Finnigan at this difficult time.

This difficult time being her marriage to Richard Madeley- a man who's a cross between Alan Partridge and Piers Morgan.

Richard is still channelling Alan Partridge on @GMB. Some comments are making me cringe. I like him, but those comments ….

A third wrote: “It’s almost like #RichardMadeley is doing a Partridge tribute! He can’t help it!”

My thoughts are with Judy Finnigan at this difficult time

They shared: “My thoughts are with Judy Finnigan at this difficult time. This difficult time being her marriage to Richard Madeley – a man who’s a cross between Alan Partridge and Piers Morgan.”

Another said: “Hard to see where Richard Madeley finishes and Alan Partridge begins.”

Marcus, 23, Bukayo Saka, 19, and Jadon Sancho, 21, were subjected to vile racism after missing penalties during the match.