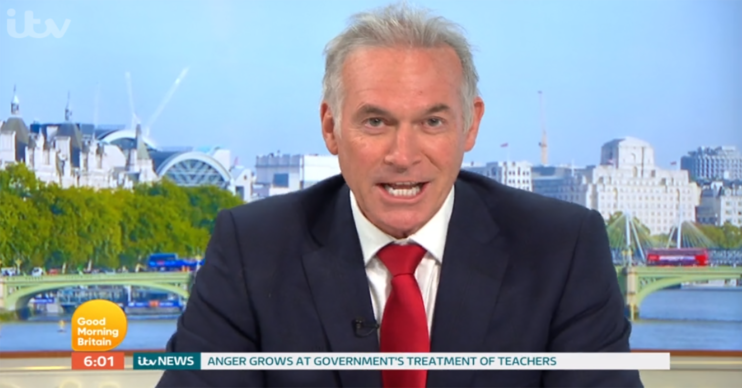 Dr Hilary took his chance to make a sly dig

Dr Hilary Jones had Good Morning Britain viewers in hysterics when he made a cheeky comment about Piers Morgan’s abs.

Dr Hilary couldn’t resist making a jibe when Piers started talking about how Cristiano Ronaldo complimented his abdominal muscles during an interview.

Piers brought up the interview he did with the Portuguese footballer, to which co-presenter Susanna Reid replied: “Can I just point out, just because someone says you have good abs doesn’t mean you do.”

“So are you calling Ronaldo a liar? Okay,” Piers responded.

But before Piers could continue with his gloating, Dr Hilary was heard shouting from his seat on the other side of the studio.

“Yeah, great abdominals for a double hernia,” he cheekily chipped in with.

Good Morning Britain viewers thought the exchange was hilarious and took to Twitter to praise Dr Hilary for making the dig at Piers.

One wrote: “Dr Hilary dissing @piersmorgan has made my day!! #GMB”

‘You have good abdominals.’
Thank you, ⁦@Cristiano⁩. 👍
Yours aren’t too bad either. pic.twitter.com/mj3xMRBnFx

Read more: Dr Hilary forced to ‘fix his own tooth’ during lockdown

Dr Hilary’s cheeky jibe comes after he and Piers had an awkward exchange on the show yesterday (May 19).

Piers asked Dr Hilary to name ‘just one thing’ that the government was ahead of the game with since the outbreak of the virus rather than being ‘two months behind’.

“Our NHS,” Dr Hilary replied. “We just have to say in maintaining an NHS that was able to cope at the peak.”

“How did we do that? We chucked all the elderly into care homes,” Piers said.

“I know,” Piers replied. “I’m just saying that the reason hospitals didn’t get run over was because we took thousands of old people out of the hospitals and we put them into care homes where they infected people.”

Dr Hilary later hit back with: “There were warnings from journalists about what may happen in a pandemic. There’s a lot of complaints now about what we should have done.

“Where were the journalists asking whether we were doing enough for care homes before the event?”