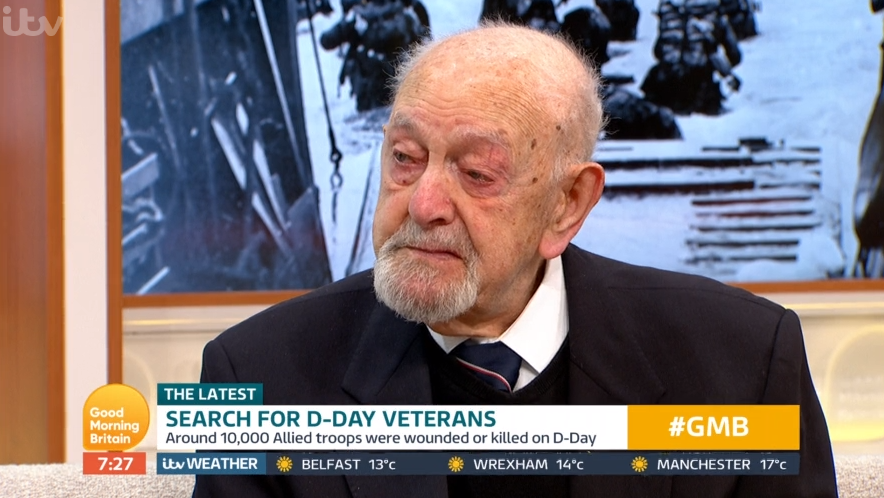 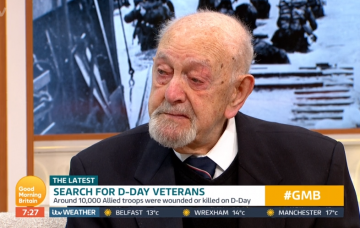 A D-Day veteran was praised by viewers after he broke down in tears on Good Morning Britain remembering those who “never made it out”.

Ted Cordery, who was conscripted at the age of 18, served on HMS Belfast between 1943 to 1944 as a Leading Seaman Torpedoman.

Discussing D-Day, Ted broke down in tears as he spoke of “the wounds, terrible, terrible wounds and most of them never, ever made it out”.

The moment Veteran Ted Cordery emotionally shared his memories of D-Day – a day when 10,000 Allied troops were wounded or killed pic.twitter.com/KLKolSosm4

“They were taken to the sick bays and most of them died,” he said.

Ted told presenters Kate Garraway and Charlotte Hawkins: “There’s nothing I can do to help anybody but I see these graves.

“It brings home to me the terrible consequences of war and the loss of loved ones. I could not believe what I was seeing. My own men.”

Thank you for everything Ted! ❤️ pic.twitter.com/L9eNgFFkvM

Denying he was a hero, he told the ITV show: “I was there to do a job. I did the job to the best of my ability… Thousands of others risked their lives.”

A chartered ship will carry D-Day veterans across the Channel in June.

Ted said: “I’m looking forward to it…  We can discuss it. Just the general community spirit.”

Viewers were moved after Cordery shared his memories.

Paul Fenton wrote on Twitter: “Ted Cordery. Thank you for everything you have done, listening to you this morning broke my heart. A true hero in my eyes.”

@Miss_NatashaL wrote: “Ted Cordery made me cry this morning, what a beautiful old fella.”

Ted Cordery ❤️made me cry this morning, what a beautiful old fella

Ted Cordery #gmb thank you for everything you have done , listening to you this morning broke my heart 💔 a true hero in my eyes

@GMB Thank you for introducing us to Ted Cordery 🙏😢

Well done @kategarraway and @CharlotteHawkns for keeping it together, I’d have been a blubbering mess #tedcordery such a lovely man! Please have him on again after his trip @GMB

Ted was later told that he was trending on Twitter.

“I don’t know whether that’s good or bad,” he said.