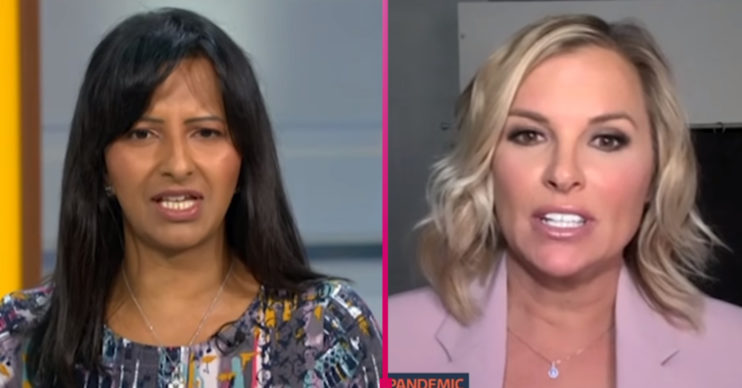 Shelley Luther insisted she has safety measures in place

Viewers of GMB were divided over a woman who was jailed for keeping her salon open during lockdown.

She was sentenced to a week in prison for keeping her salon A La Mode open, however, Gov Greg Abbott ensured early release after two days.

Shelley said: “We had been closed for a month and my hairdressers were telling me they couldn’t pay their mortgage and having a hard time feeding their families.

“I was kind of in the same position.

“I thought for sanitation reasons, it would be smarter and more responsible for me to open the salon where I could control the environment.”

She continued: “I knew I was going to get a visit from the police and in to some trouble but not to what extent.”

When asked what the two days in prison were like, Shelley said: “Just exactly what you think it would be like.

“I’ve never been to prison or jail before and it’s definitely not a fun thing.”

Host Ranvir Singh asked: “Was it worth it?”

Shelley replied: “Oh absolutely. My hair salon, when I opened it on April 24th, has not closed since even when I was in jail.

“My hair stylists were able to get back to work and providing for their families.

“Yes, there is a virus going around but we’re all responsible adults and we can take the proper precautions.

'It's definitely not a fun thing!'

Hairdresser Shelley Luther from Dallas spent two days in prison for refusing to shut her salon.

However, she says it was 'absolutely worth it' because her hairstylists were able to work and provide for their families. pic.twitter.com/As7BSAe3co

“If people don’t want to come in, that’s their right to.”

Shelley said her case is still in the Texas Supreme Court now and isn’t bothered about having a criminal record.

Shelley has set up social distancing measures in the salon, with perspex screens between the salon worker and client.

Viewers were divided over Shelley’s decision to keep her salon open.

One person said on Twitter: “Never mind the danger to life then, at least we can die with a good haircut!”

Another wrote: “Got no idea how she feels, mainly because I’m not a selfish person.”

Never mind the danger to life then, at least we can die with a good haircut! 🙄

Got no idea how she feels, mainly because I’m not a selfish person.

However, others defended Shelley.

One tweeted: “I fully support her!!!!!” while another said: “Good for you Shelley well done, I can’t wait to go back.”

Another commented: “Good for her, the entire #covid lockdown fiasco is based on bad science and governments’ distortions of the truth.”