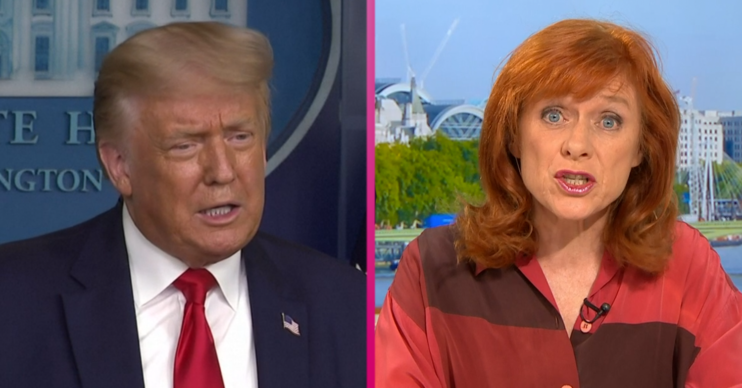 The President caused controversy with his comments about hydroxychloroquine

The President has alleged that the drug can cure COVID-19 – but the medical community has spoken out against him.

The President’s son Donald Trump Jr. was even suspended from Twitter yesterday after sharing videos supporting his father’s claims.

Speaking out against the backlash, the President told a press conference: “I think [hydroxychloroquine] could have a very positive impact in the early stages [of COVID].

“And I don’t think you lose anything by doing it other than politically it doesn’t seem to be too popular when I recommend it.

“Do you know why? Because when I recommend something they like to say don’t use it.”

Responding to Trump’s statement, the GP sarcastically hit back: “Yes and the only reason we don’t recommend injecting bleach into yourself is because Donald Trump recommended it!”

She added: “It is absolutely not a viable prospect. There were some controversial trials using hydroxychloroquine with another drug and antibiotic.

“We already use hydroxychloroquine for the treatment of a condition called lupus and it can be very effective –  but we know that all drugs have side effects.”

“And there have been some very controversial results from different studies.

Dr Sarah went on to explain that other drugs are achieving more exciting results.

However, this is only for people at certain stage of COVID.

'Nobody is going to compromise on safety.'@DrSarahJarvis reassures people amid the safety fears of the coronavirus vaccine. She explains that international collaboration and the freeing of financial steps have enabled 'us to move forward much more quickly.' pic.twitter.com/Dz456coktL

She explained: “When the body is attacking itself and you have an overreaction of the immune system, at that stage, a drug like dexamethasone can reduce the risk of dying of someone that’s been ventilated by about 30 per cent.

“But it probably won’t work at other stages.

“We have to look at the evidence.”