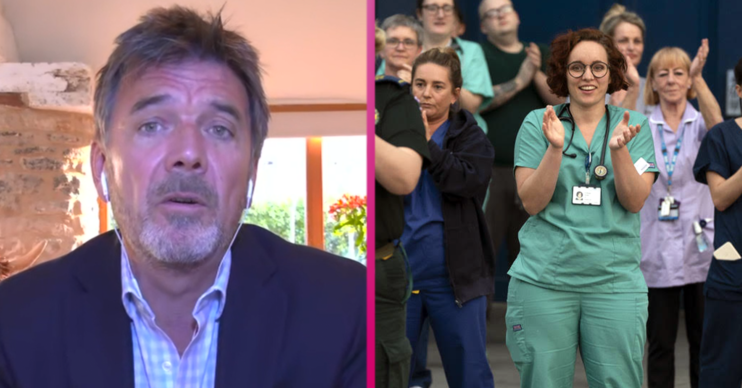 The Good Morning Britain star agreed it's time to end the movement.

Dr Mark Porter revealed his thoughts on Clap for Carers on GMB this morning (May 28).

Speaking to Good Morning Britain hosts Ben Shephard and Ranvir Singh, he admitted he was overwhelmed the first time it happened.

However, the GP agrees it’s now time to end the movement.

“I had a lump in my throat, I don’t mind admitting, the first time it happened but I’m a little worried that it’s carrying on every week,” he explained.

“It’s also great that it’s been extended to appreciate far more people than just doctors and nurses – for example carers, social workers, essential workers, all of those sorts of things.

“But I think certainly for the medical community that there’s a little bit of embarrassment because we’re not the only ones who are doing a good job.

“The public and the community are doing an amazing job.”

Dr Mark then went on to stress that while it was a difficult time for doctors and nurses “we do get paid to do what we do”.

He added: “Thank you for thanking us but now is the time to stop thanking us and think of other people.”

Clap for Carers organiser speaks out

The first Clap for Carers took place on March 26.

Organised by Annemarie Plas, it was such a roaring success that it now takes place every Thursday at 8pm.

The Royal Family, prime minister, celebrities and the public share videos weekly to show their appreciation.

However, tonight will mark the tenth and final Clap for Carers.

Speaking to ITV, organiser Annemarie said: “I think it’s good to have the last of the series [tonight], because to have the most impact I think it is good to stop it at its peak.”

Annemarie added: “Without getting too political, I share some of the opinions that some people have about it becoming politicised.

“I think the narrative is starting to change and I don’t want the clap to be negative.”

Clap for Carers to go annual

The mother-of-one is now hoping to make Clap for Carers an annual event as opposed to a weekly occurrence.

“Stopping clapping doesn’t mean we are not still appreciating them,” she explained. “Some people will still want to carry on, so they should.

“But we will stop and show our support in other ways – there are other initiatives we can support.”

The final Clap for Carers takes place tonight at 8pm.