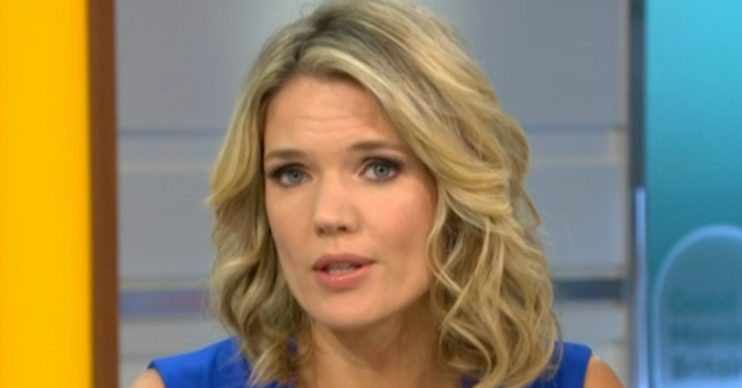 GMB: Charlotte Hawkins divides viewers with bold outfit after giving some a ‘headache’

The 45-year-old presenter appeared on the programme alongside co-host Kate Garraway in a Karen Millen dress.

But while some fans loved the yellow look, others complained Charlotte’s outfit gave them a “headache.”

What did Charlotte Hawkins say about her outfit?

At the beginning of Friday’s show, Kate commented on Charlotte’s fluorescent pick.

She told the star: “You look very bright!”

Charlotte replied: “I have come as a highlighter pen.

“Don’t adjust your TV sets, yes I am that colour.”

Furthermore, Kate went on to complain about her hair.

She insisted her hair had turned “curly” just minutes into the programme.

Meanwhile, Charlotte later showed off her yellow dress on her Instagram feed.

Alongside a sun emoji, she penned: “Do not adjust your sets.”

The colour block dress – featuring a ripple-stitched belt and a zipper – is currently on sale at Karen Millen for £111.75.

However, some fans believed the bright colour was too much for the early morning.

One commented: “@GMB please tell Charlotte Hawkins to change her dress… it’s giving me a headache.”

A second shared: “Thought you had an high vis on this morning.”

In addition, a third wrote: “Not too sure about the yellow dress though, reminds me of a lemon Bon Bon.”

Another added: “Did they have to turn down the studio lighting for that dress?”

Meanwhile, others appeared to love the look.

It’s giving me a headache!

One viewer said: “Gorgeous ray of sunshine today. Brightened up the whole building.”

Furthermore, a second gushed: “You look amazing. What a gorgeous dress.”

Reacting to the colour, another wrote: “I love the photo and you look stunning in yellow.”

@GMB please tell Charlotte Hawkins to change her top.. its giving me a head ache 😳😳😳

Charlotte and Kate were joined by comedian Paddy McGuinness on today’s show.

During the chat, the 47-year-old appeared to poke fun at former soap star Patsy Palmer for storming off the programme this week.

The ex EastEnders actress abruptly ended her interview on Wednesday (March 17), after taking issue with the way it described her to viewers.

However, Paddy used it as an opportunity to quip about what happened with Patsy.

After noticing his on-screen graphic, he joked: “Well done on the ‘comedy genius Paddy McGuinness’, there’s no walking off here with that!