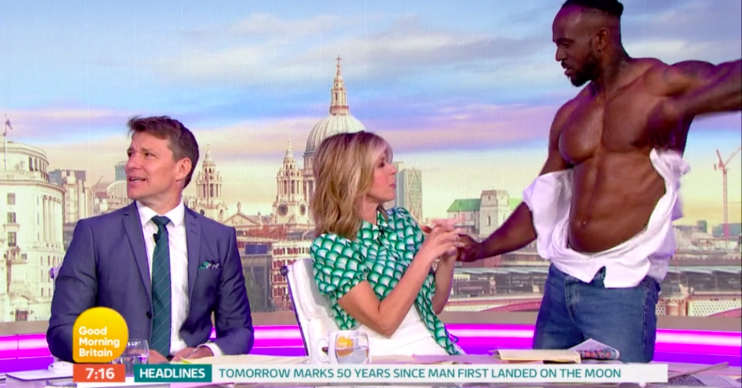 Uh oh, they’ve only been in charge of the ship for a few days, but Kate Garraway and Ben Shephard are already in trouble with the viewers.

Ben and Kate – along with Charlotte Hawkins and Richard Arnold – welcomed the three men onto the set as part of a conversation about the construction-themed challenge on Thursday night’s Love Island.

Entertainment editor Richard said: “Come on lads, throw some shapes,” as they took their tops off and started dancing up against the team.

Kate initially seemed happy, saying: Look at that… ooh hello!” But when they got too close, she freaked out, squealing: “Hang on! You look very intelligent and wise. Where’s the cut? Just when you want the director to cut…” Speaking to her dancer, she added: “Hello, you look lovely.”

Ben looked particularly uncomfortable and quickly tried to move to the news and weather.

The ITV morning show – whose usual hosts, Piers Morgan and Susanna Reid are currently on a summer break – tweeted: “If #LoveIsland can have a construction-themed show, so can Good Morning Britain 😅…”

They later shared a clip of Kate spanking one of the men after telling him: “No, I can’t hit you on your bottom! What is going on?”

As they cut to the advert, Kate was seen introducing herself, saying: “Hello, young man, how are you?”

But viewers were deeply unimpressed by the early morning segment, with many slamming the pre-watershed content.

One wrote: “Having half naked men gyrating about the stage while children are having their breakfast is disgusting, what the hell is going on GMB? This is disgraceful.”

A second tweeted: “Ben and Kate, surely you would not be happy when your children were 6 and 8 years old, watching and asking questions about such a show at this time of day?”

A third even contacted TV watchdog Ofcom, commenting: “@Ofcom great content for my 7 year old daughter. Why do you allow this content to happen on a regular basis before the 9pm watershed. There are too many adult themes happening before 9pm on a daily basis, one reason our kids are not kids anymore #disgrace.”

Several men pointed out possible double standards, with one tweeting: “Now let’s get a topless woman on there and Ben can swat her bottom too. We must have #equality these days 🤔.”

Another confused man tweeted: “There is the hypocrisy of feminism in all its glory.” A third man wrote: “If that was Ben doing that to a female stripper there would be hell on earth right now.”

We’re wondering what Piers would’ve made of these guests? No doubt he’ll be quick enough to tell us on Twitter sooner or later…

What did you think of the segment? Leave us a comment on our Facebook page @EntertainmentDailyFix and let us know what you think.