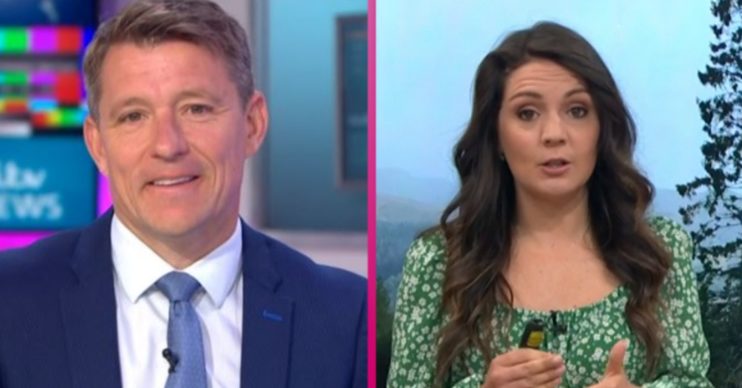 Presenter Ben Shephard scrambled to correct himself as got his colleague Laura Tobin‘s name wrong live on GMB.

On today’s (Wednesday, July 15) episode, Ben and Charlotte were discussing the musical Hamilton after a segment about London’s Shaftsbury theatre.

But Ben a blunder as he attempted to make a smooth transition to Laura with the weather.

What did Ben Shephard say on Good Morning Britain?

Charlotte said on the programme: “Let’s hope that the theatres are back up and running soon. Anyway we need them, we need a bit more normality.”

Ben then said: “Good weather, I think, for streaming Hamilton this evening, Charlotte? Erm, Laura. Whatever your name is!”

Laura told him: “You were either thinking of my little Charlotte or that… not big Charlotte. She always gets that face when I call her big Charlotte!”

“Not Big Charlotte, just The Other Charlotte,” Laura said, apologetically. “Thank you for another tenuous segue into the weather, Ben.”

Earlier, the meteorologist was cut off mid-sentence due to a technical blunder.

Ben was telling viewers about a special gift he received from Buckingham Palace.

The dad of two said he was sent a bottle of special gin made from ingredients grown at the palace and was discussing it with Charlotte.

He said: “It’s really really special, and in theory it’s the Queen’s back yard that has put these botanicals together. Very floral, very tasty, Charlotte. Very regal. And it was the weather for gin yesterday, we had some bright spells. The question is, is it gin weather today, Laura?”

Weatherwoman Laura then chimed in with her opinion, as she said: “Indoor gin drinking is probably…”

But unfortunately, the programme cut to an advert from sponsor Boxt Boilers, completely drowning Laura out.

Confused, she said, “Oh!” and when it got back to the regular programme, she joked: “I think somebody had been drinking gin just then…”